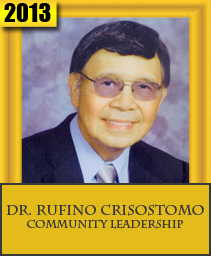 Dr. Rufino Crisostomo has devoted himself to do humanitarian w o r k a s a m e d i c a l m i s s i o n a r y, e s t a b l i s h i n g t h e H e a r t C r o s s Foundation and Mercy Medical Mission for the victims of devastating hurricane KATRINA (US) and typhoon ONDOY (Philippines), and other natural disasters. He was a member of the Ninth Team of volunteers sent by the General Board of Global Ministries of the United Methodist Church to work in a refugee camp in Zaire (The Congo), Africa where thousands of refugees from war-torn Rwanda and Barundi, Africa lived. He has also participated in several medical missions in the Philippines and Seoul, Korea. While living in Kentucky for 15 years of private practice, Dr. Crisostomo was very active in public and civic affairs, serving as a director of the local Democractic Party, Chairman of the K n o x C o u n t y H u m a n R i g h t s Commission, President of the Kiwanis Club, Chamber of Commerce and the Garden Club. He also chaired numerous other civic organizations and served in the Board of Directors and subsequently in the Board of Trustees of Kentucky Medical Association. aving been a Chicago resident for many years now, he remains to be interested in politics and community services. He has served as a Board of Trustees at Chicago Temple United Methodist. He is currently the Medical Director of the Filipino American Council of Chicago’s (FACC) Volunteer Medical Services. He is also serving as the Assistant Director of the Senior Services and Health Fair Chairman for the FACCl He also serves for Illinois Secretary of State Jesse White’s Asian American Advisory Council. A board-certified OB-GYN, and Liposuction surgeon, Dr. Crisosotimo, now retired, was an active member of the American Board of OB-Gyn, American Academy of Cosmetic Surgery, American Society of Liposuction, and Inter-American Society of Cosmetic Surgery. He had been a lecturer on his medical expertise at the Association of Practicing Physicians in America (APPA) meetings in Canada, Philippines, Peru and the US. He has published papers on “Body“ Liposuction and GYN Procedures in the Contemporary OB-GYN Journal. He was a speaker at the cosmetic Surgical Congress in Florida on Hyperhidrosis Axillae Treated by Lyposuction. He invented the Cris Cannola procedure which the Russian Institute of Scientific Information has for his abstract presentation on the same topic in Washington, D.C. He also authored “Combined Mini- Abdonimoplasty and Liposuction” for the American Cosmetic Surgery Journal. Recently retired from the Chicago Dept. of Public Health after 21 years of service, Cook County Department of Health STD/HIV Clinic, he is serving actively in various organizations including the Knights of Rizal, Free Masonry Shriners & Knights Templar, Lions Club International, Rotary Club International and the Yacht Club. He does a lot of volunteer work for the Filipino and Asian American communities in Chicago. He has received numerous awards from several civic organizations. He served as Chairman Professor for the OB-GYN Department of Southwestern University in Cebu City, Philippines, after graduating from the Far Eastern University Department of Medicine in the Philippines. For his hobbies, he took drama classes at Union College, Barbourville, Kentucky and starred in Niel Simon’s “Come Blow your Horn.” He acted at a Paramount Pictures for TV mini –series, The Centennial,” filmed in Kentucky with Robert Conrad and Richard Chamberlain. “ Dr. Chris” has two children, Glenn, a nurse, and Daisy, both California residents, from his late wife, Tessie. Dr. Crisostomo was nominated by Ms. Carmen Estacio.