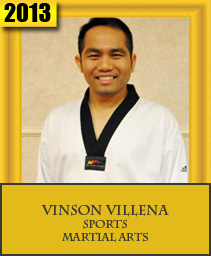 Vinson Villena has been practicing Taekwondo for almost 30 years and has over 20 years of experience teaching this martial art at several universities, schools, fitness centers and park districts in the Philippines, Los Angeles, and Chicago. Some of his many accomplishments in this sport include being a Fifth Degree Black Belt, an NCAA Taekwondo MVP, and former Philippine Taekwondo Team Player. He has competed and won in several local and international tournaments like the World University Taekwondo Championships, US Open Taekwondo Championships, International Cup Taekwondo Championships, National Taekwondo Championships, and Best of the Best Taekwondo Championships. Vinson grew up in Batangas City, Philippines and earned his degree in Industrial Design from LaSalle University in Manila. He chose LaSalle because of their prestigious Taekwondo program. While there, he would practice in the morning, go to classes, practice in the afternoon, and teach both Taekwondo and graphic design classes. After graduating, he worked for GMA channel 7 as a 3D animator and motion graphic designer doing TV commercials, but continued practicing and teaching Taekwondo. Now residing in Chicago, Vinson has accomplished one of his life’s goals: opening his own Taekwondo school. Flying V Martial Arts main school is located in Oak Park, IL. and has satellite schools in Rolling Meadows, Jefferson Park, Flying High in Countryside, Grace Montessori in Melrose Park, Mosaic Montessori in River Forest, Hatch Elementary school and BEYE elementary school in Oak Park, and Francis Xavier Ward school in downtown Chicago. Recently, the main school moved to a new location three times bigger than the original one, which is exciting for the growing school. What is unique about Vinson and Flying V is the focus on building character in the students. They concentrate on empowering students by building their confidence, self-esteem, discipline, and respect. He and his instructors teach kids to give back to the community and model this philosophy in and outside the Dojang (Taekwondo school). His school gives its time to teaching outside of the main school in order to raise funds and donates the proceeds back to school districts as well as conducts canned food drives, with collections given to shelters in the Chicagoland area. Vinson’s school philosophy of character development incorporated into his Taekwondo curriculum has resulted in stories about Flying V being published in several newspapers. Additionally, he has trained and produced US Open Champions, National Champions who qualify to compete in the Junior Olympics. This August, the Flying V Demo Team is performing during the half time show at a WNBA Chicago Sky game. Vinson was nominated by Teri Cruz