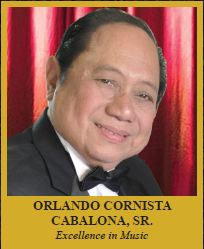 Orlando C. Cabalona Sr. is a native of Jaro Leyte, Philippines. A born musician, he started playing at a very young age by watching his classically trained grandfather secretly and imitating him play behind his back. This led to him studying piano through the tutelage of Ms. Leonor Almeria and furthered his education at the Yamaha School of Music. He studied at the San Carlos University and finished a degree in Engineering but Orlando never left his love for music behind. In the Philippines, he was the first musician Yamaha commissioned in Visayas to showcase the Yamaha one-man band organ, along with Relly Coloma in Luzon. He had the opportunity to work with famous local artists in the past and joined several music competitions, winning the prestigious Musician of the Year Award in the country. Orlando’s talent and passion for music also brought him to perform in different parts of the country such as Cebu, Manila, Davao, and Tacloban, as well as overseas including Japan where he performed for three years before they migrated to the US. Here in Chicago, he continues to share his passion and performs as lead guitarist for the Na Mele Aloha Hawaiian Ensemble that plays regularly around Chicago. He also had a very successful solo concert at the Skokie Theater last October 2011 and is planning for another one within the next two years. Most importantly, he has been actively committed to promoting Filipino music among the Filipino-American community with his son, Baron, and daughter-in-law, Louella as part of SamaSama Project. Together, they have been performing at various cultural festivals and in special events as featured guests locally as well as in other countries such as Madrid, Spain. Orlando is happily married to Genia and is blessed with three musically talented children; Orlando Jr., Baron and Chica. Interesting Trivia: Orlando plays the piano, guitar, ukulele, drums and the accordion. He can also play ANY song after listening to it once!