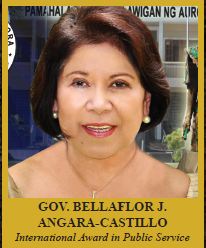 A visionary leader with numerous awards and recognition as an exemplary performer in every aspect of her life – as student, law practitioner, mother and politician – Governor Bellaflor J. Angara-Castillo is strongly motivated to work for the best of Aurora Province. She obtained both her Bachelor of Laws (Class Salutatorian, Cum Laude) and Bachelor of Science in Jurisprudence (cum Laude) degrees, from the University of the Philippines. She was a Scholarship Grantee for Masters of Laws Program at Yale Law School and was a participant in the Leaders in Development Program at John F. Kennedy School of Government at Harvard University, Cambridge, Massachusetts, USA. In her law practice, she was voted one of the five Outstanding Women in Law in the Philippines by the Women’s Lawyers’ Association of the Philippines. She earned a Diamond Award for Excellence in the Legal Profession/Bar Practice given by Portia Sorority of the University of the Philippines, College of Law. As a mother who brought up her children to achieve successfully and happily in their own fields of profession, she was chosen among the 1999 Golden Parent Awardees as the outstanding Parent-Achiever of the Year by the National Family Week Awards Committee during the Parangal sa Pamilyang Pilipino ’99. She was also awarded the 2002 Ulirang Ina Award by the National Mother’s Day and Father’s Day Foundation of the Philippines. As a politician, she is the First Woman Majority Leader in the history of Philippine Congress (11th Congress). She is a Congressional Hall of Fame Awardee for having won four (4) consecutive Outstanding Congressman Awards since 1998 by Congress Magazine and the Makati Graduate School. In 2001, she was voted as one of the Most Consistent Outstanding Congressman for 3 consecutive years by Makati Graduate School for 2001. She received special citation for being the Representative with the Most Number of National Bills enacted into law among neophyte Congressmen and Sectoral Representatives during the 10 th Congress.     After her maximum term as Representative of the Province, she decided to run for gubernatorial seat on May 11, 2004 election where she garnered 66% of the total votes cast. In order to build the pillars of her programs within the realm of good governance and leadership by example, Governor Angara-Castillo capsulized her 6-point development agenda in the acronym HEALTH which stands for Health, Education, Agriculture, Livelihood, Tourism & Environment Management and Human Development. HEALTH serves as Governor Angara-Castillo’s guidepost in crafting sustainable development programs and in pursuing judicious investment decisions for the province of Aurora. In her first term as Governor, she was a recipient of the Regional KABALIKAT Award given by TESDA recognizing her all-out support to skills development and adult education as a measure to create job opportunities and sustainable livelihood among out-of-school youth and helpless rural households in the province. Another KABALIKAT Award was given to her by the Philippine Council for Industry and Energy Research and Development (PCIERD) recognizing her projects and policies tapping a High Technology Early Warning System for Disaster Mitigation in the Philippines and a Mini Hydro Electric Plant in the Province.     Early on her second term, she has also received the national award of Outstanding Governor for two consecutive years for her exemplary performance and support to social welfare and development initiatives given by the Association of Local Social Welfare and Development Officers of the Philippines, Inc. She was also awarded recognition for being number one in Region III in the implementation of the Early Childhood Care and Development Act (RA No. 8990) of which she was the principal author when she was a Congresswoman. She was also awarded as Most Outstanding Local Chief Executive Regional Category, Region 3 and National Category (STEP-DepEd) for her great passion and dedications to service as exemplified by her extraordinary Efforts and Selfless Contribution to Students Technologist Entrepreneurs of the Philippines. She was a recipient of the NCCA Award given by the National Commission for Culture and Arts (NCCA) and the International Theater Institute (ITI) as Outstanding Culture Friendly Local Government Official. She was also a Gawad Parangal Hall of Famer for receiving the award as the Most Outstanding Local Chief Executive for three (3) consecutive years given by the Association of Local Social Welfare and Development Officers of the Philippines, Inc. At present, Governor Angara-Castillo holds the helm of the Central Luzon Investment Coordinating Council/Central Luzon Growth Corridor Foundation, Inc. (CLICC-CLGFI) as its President. She also holds the position of Assistant Treasurer of the National Board of League of Provinces of the Philippines. All through her life, she aimed for excellence even in selecting a lifetime partner. She married Atty. Gregorio R. Castillo, a consistent first honor student from elementary to college (UP college of Law, Valedictorian and Cum Laude), and First Placer in the 1957 Bar Examination. They were blessed with four bright children, all successful in their own chosen fields of profession namely: Atty. Joseph Gregson, Dr. Joy Arabelle, Atty. Jerome Patrick, and businesswoman Jo Ellinore. Asked about her feeling as Governor, she often says, “There’s nothing more fulfilling and challenging than being a ‘hands on’ local chief executive who is close to the hearts and minds of the people.”