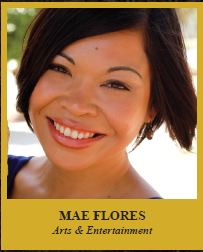 As a young child of three, Mae’s mother enrolled her at the Cultural Center of the Philippines where she studied ballet. She was also accepted to the prestigious Children Repertory Theatre in Makati, where she studied theatre, and was also admitted to various reputable dance academies in Manila, where she studied and fine-tuned her dance skills, including modern dance, jazz, tap, and lyrical, as well as music skills. ` When she was 11 years old, Mae Flores immigrated with her family to Chicago, where her promising training in the performing arts continued. She majored in modern dance, choreography and performance at Columbia College, and quickly excelled in the program, performed in some advanced student dance shows and national competitions. She was a finalist in the National Association of Dance Masters, one of her greatest achievements in the dance field. She also self-taught Latin dancing studying from VHS tapes, and bravely decided to audition for the Latin Street Dance Chicago dance company, one of the most prestigious and competitive professional Latin dance companies in the Midwest and was accepted as one of only two professional Latin dancers for that year. Mae later moved to Los Angeles, where she concentrated on her acting career. Mae got her toes wet in Hollywood by acting in some small roles in independent films, as well as a few TV commercials. However, it wasn’t long before her big career break arrived when Mae was selected as one of the lead actors in the science-fiction feature film “Atlantis Down,” pairing with prominent actors Michael Rooker, Dean Haglund and Greg Travis. Despite her limited acting experience, Mae immediately caught the attention of director and producer Max Bartoli, who subsequently called off the remaining auditions for this female lead and immediately offered the role to Mae Flores.     Fans in the Filipino community all over the United States and nternationally have quickly embraced Mae Flores as their nation’s hope for new international recognition in Hollywood, and have literally flooded Mae’s profile pages on Facebook and Twitter, which grew to several thousands fans in the span of just a few months. On November 10th, 2010, Mae was invited to speak to over 2,000 attendees at the Empowerment Conference of the National Federation of Filipino American Associations, a Washington policy-maker group. This conference was also video streamed internationally throughout the Internet, and several thousand Filipinos around the world were able to take part to this International event. In celebration of Filipino American History Month 2010, she served as a special guest speaker and received various awards from the state of Virginia. The city of Portsmouth, Virginia, where the movie Atlantis Down was filmed, proclaimed October 3rd, 2010 as the official “Mae Flores Day” to celebrate the discovery of this exciting new Filipina-born actress. The United States Naval Base’s First Class Petty Officer Association in Virginia Beach presented Mae with an Honorary Association Membership to the USS Theodore Roosevelt (CVN-71) active aircraft carrier “for her leadership efforts in boosting morale and educating sailors on the rich Filipino American culture. On October, 3rd, 2010 the Filipino American Community Action Group of Hampton Roads Virginia presented Mae Flores with a lifetime membership “for her commitment, dedication, and outstanding contribution in the Entertainment Industry, enhancing the image of Filipino Americans, not only in the United States, but throughout the world.” On October 16th, 2010, the Council of United Filipino Organizations of Tidewater and the Philippine Cultural Center of Virginia, the largest Filipino organization on the East Coast and the second largest Filipino community in the United States, officially named Mae Flores as its first ‘Daughter of the Philippine Cultural Center.’ Despite her short career to date, Mae Flores has already caught the heart and imagination of thousands of young Filipinos who now so warmly look at Mae as a much-needed breath of fresh air and an inspirational message of hope. Mae Flores’ success is a clear demonstration that it is possible for the new generation of young Filipinos to pursue their dreams despite all odds.