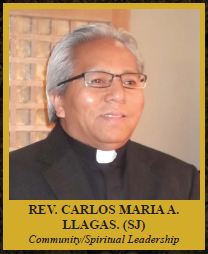 Raised in a prominent clan of Misamis Oriental, Fr. Carlos Agcopra Llagas has always been associated with the Agcopra Clan’s dominant traits: intelligence, gray hair, audacity.  A consistent honors student, Fr. Carlos graduated valedictorian three times–in Grade School, High School, and Graduate School.  Fr. Carlos entered the seminary system of the Roman Catholic church at the age of thirteen in 1970’s through the sponsorship of his aunt, who was an RVM nun in Davao del Sur. At seventeen, a Jesuit professor of his in College at Xavier University advised Fr. Carlos to transfer to the Jesuit seminary system from the Diocesan seminary.  Where he was supposed to graduate in 1980 from Xavier University with a Summa Cum Laude in Chemistry and Mathematics, Fr. Carlos was moved to the Jesuit Novitiate in Novaliches in 1979 and he eventually graduated college as a Jesuit scholastic with a degree in Philosophy from the Ateneo de Manila in 1984.  Fr. Carlos was a consistent honor student at the Ateneo but, due to lack of residence, Fr. Carlos was not awarded his well deserved Magna Cum Laude award. After college, as a Jesuit seminarian years away from Ordination, Fr. Carlos went to his assigned post at the Ateneo de Zamboanga High School, where he taught Math and Religion and served as the school’s Guidance Counselor.  While in Zamboanga from 1984 to 1986, Fr. Carlos was Treasurer of the Eastern Mindanao NAMFREL (National Movement for Free Elections), a civic group that helped topple the Marcos regime.  It was in Zamboanga that Fr. Carlos knew in reality the meaning of the Jesuit mission–to serve for God’s greater glory even unto death.  In Zamboanga he was only meters away when the Mayor of the city was assassinated due to the Mayor’s political stance against the Marcoses.  It was in Zamboanga that he was almost hit by guns and launch grenades thanks to the warring factions of Muslims and Christians.  In Zamboanga he defied curfew orders in order to help man election posts and ensure an honest election.  From Zamboanga he moved back to the Ateneo de Manila to finish his theological studies needed for the sacrament of Ordination.  After his third year of Theology, he was ordained a priest on April 8, 1989 by the late Jaime Cardinal Sin.  He graduated theology as an ordained priest in 1990 and he was chosen from among the graduates with honors to give the valedictory for the class.  In this graduation address Fr. Carlos said, “You are a priest forever, you will be a priest forever because God’s love for people is eternal.  For as long as there are people to love and to serve, your priesthood will grow because that love for people will let you see the face of God who is eternal.”  This love for people theology has been the one that has guided Fr. Carlos in his drive to serve others as a Jesuit, as a priest, as a human being.  This was his guiding light and inspiration when he served in the Jesuit missions in the 1990’s for the Vietnamese refugees in Bangkok and the Cambodian refugees near the borders of Thailand and Laos.  This love of God and people was his strength, when, as a very young priest, he was incarcerated in Vientiane (Laos) for defending the faith.  This was the same driving force when he worked as Vice-President for University ministry at the Ateneo de Davao from 1992-94. And this has been the same spiritual energy that has propelled him to study God’s word in Chicago’s Hyde Park, where he has had the opportunity to take courses in the seminaries there and the University of Chicago, where he has also studied Greek, Hebrew, German, and French.Fr. Carlos A. Llagas is a priest, a scholar, and an intellectual. He knows several languages, such as the ones mentioned above–Greek, Hebrew, German, French–as well as Thai, English, Spanish, Tagalog, and his own native tongue, Cebuano Bisaya. His research/book on Resurrection before the time of Christ has put him in the list of scholars in the Oregon-based Theological Research and Exchange Network.  His research–relying only on the Greek language of the New Testament–on Paul’s first letter to the Corinthians has earned him an award of the Best Student in Greek in Hyde Park given in 2001 by the Greek Master, Rev. Dr. Krentz of the Lutheran School and the University of Chicago.Up to the present, Fr. Carlos continues to be a scholar; his next book on faith vis-a-vis the bureaucratic church could become a spring board for intellectual discussions in seminaries and universities all over Christendom. Last but not least, Fr. Carlos still continues to live as a priest, albeit a priest like a wandering prophet without a home.  Yet he feels so at home with himself, with people, and with God. All this is enough for him. It is enough that at times the words he prays as most, if not all, Jesuits do, become as real as God’s miracle itself: Give me only your love and your grace, that’s enough for me, your love and your grace are enough for me.