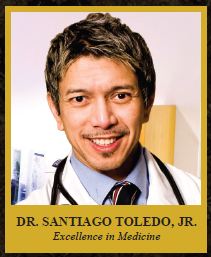 Santiago Toledo Jr., more fondly known to his family and closest friends as Boyet, was born in Manila, Philippines on July 23, 1959 to Santiago Ybanez Toledo and Patria Ambrosio DeLeon-Toledo. His late father is a lawyer and outstanding government official who served the Department of Justice as Director for the renowned National Bureau of Investigation (NBI), while his mother who graduated from the same law school raised Boyet with his 3 younger brothers (Manuel, Livirgo, and Antonio). He attended elementary and high school at the Benedictine Abbeys of San Beda College (SBC) in Manila, where he participated in the student council, co-curricular organizations in science & mathematics, devotion to institutions of spirituality, campus athletics, dramatics and the music club. He graduated at the top as valedictorian and led his class in the graduation of 1977 before his pursuit of pre-medical courses in Psychology and Biology at the Diliman campus of the University of the Philippines (UP). Marking his career once again with honors as Magna Cum Laude he commenced with medical education at the University of Philippines College of Medicine (UPCM) in Manila campus. After receiving his M.D. in 1985, Dr. Toledo was one of the few appointed for straight internship training in Internal Medicine at the Philippine General Hospital (PGH). After 4 years of work at the PGH and affiliations at the Philippine Heart Center and the Lung Center of the Philippines, he became convinced that he needed to expand his horizons and face larger academic challenges, and thus decided to seek the proverbial greener pastures across the Pacific ocean and settle in the west coast of the United States of America. Dr. Toledo’s career developed further towards completion of clinical fellowship at University of California Los Angeles (UCLA) in the newly-emerging field of Geriatric Medicine and Gerontology, graduating in 1995. He anticipated the evolving demographics of the world, and the ever-changing imperative of the nation’s healthcare systems, so he sought another medical specialty in Physical Medicine and Rehabilitation. He successfully accomplished this additional education in 1999 as Chief Resident in the multicampus programs at Temple University in Philadelphia, and affiliations with Moss Rehab Hospital, Albert Einstein Medical Center, Thomas Jefferson Hospital, A.I. Dupont Children’s Hospital, and the Hospital of the University of Pennsylvania. It was evident that Dr. Toledo was designing new pathways in clinical medicine and research when he left the coastal training and lifestyle to establish his practice in the midwestern city of Chicago. In1999, Dr. Toledo joined the prestigious staff in practice at the hospital and clinics of the Rehabilitation Institute of Chicago (RIC) where he is recognized as one of its 22 physicians named as Top Doctors of the country. Founded in 1954, RIC has been designated the “#1 Rehabilitation Hospital in America” by the U.S. News and World Reportevery year since 1991. The RIC is the nation’s #1 ranked provider of comprehensive physical medicine and rehabilitation care to patients from around the world and is the leader in research and development of the cutting-edge treatments and technologies in its field. Dr. Toledo serves as Medical Director of the Orthopedics and Arthritis programs at the RIC, with his primary practice in the Streeterville/ Gold Coast location of downtown Chicago. He holds a faculty appointment as Assistant Professor at the Northwestern University Feinberg School of Medicine, teaching classes through various levels of medical education at the school and in the residency program, and he was awarded the Mentor of Year recognition recently. Dr. Toledo is also a consultant physician for Northwestern Memorial Hospital (NMH) and for Rush-McNeal-Loyola (RML) Specialty Hospital, a long-term acute care facility in the western suburb of Hinsdale, Illinois. He served as Chief of Medical Staff in 2005-2007 and continues to provide physician leadership at RIC in setting the standard of care in the post-acute market through its innovative applied research and discovery programs particularly in the areas of neuroscience, musculoskeletal medicine and technology transfer. Dr. Toledo is the Medical Director of the RIC Center for Parkinson’s Rehabilitation, providing a unique interdisciplinary approach by coordinating physical, occupational, speech and fitness therapies in a collaborative plan that is individualized for each patient. With a distinct staff of highly-qualified clinicians and researchers, he provides directions for RIC’s intensive and highly specific treatments across the continuum of inpatient, day rehabilitation, outpatient rehabilitation and integrated fitness exercise programs. At RIC, the team pushes the limits of standard of care, creating a synergistic interface of research and clinical programs at the frontiers of Parkinson’s rehabilitation. Dr. Toledo has published original articles, textbook chapters and abstracts, and has presented nationally on lectures on arthritis and debility, orthopedics and joint arthroplasty, performing arts medicine, geriatrics and disability, and rehabilitation and exercise for Parkinson’s disease. He is a member of the American Board of Physical Medicine and Rehabilitation (ABPMR), American Association of Physical Medicine and Rehabilitation (AAPMR) and Association of Academic Physiatrists (AAP). He is also recognized for contributions in the community through past membership in the Board of Directors for Howard Brown Health Center, The AIDS Foundation of Chicago, and currently provides volunteer leadership as Co-Director for Archdiocesan Gay and Lesbian Outreach (AGLO) Chicago. He also enjoys serving as a member of the Associate Board of the Rehabilitation Institute of Chicago. Proudly as a Filipino and a physician, and yet with profound humility, Dr. Toledo shares this Hall of Fame award dearly with his family and his partner Lawrence Cubalchini, their adorable pet Boxer Lauren, and their magnificent circle of closest friends. And his gratitude to all is committed to his spirituality and the Catholic faith.