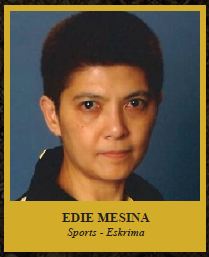 Kampilan Eskrima System A natural athlete, Edie was engaged in different sports most of her life. She went to college at the University of San Carlos in Cebu on a basketball scholarship. While playing for her college team, she was also offered a slot in her school’s tennis varsity team. Edie’s martial arts journey began in her home city of Cebu, also home to some of the country’s great Eskrimadores. Her desire to learn the art of Eskrima, also popularly known as Arnis or Kali led her to train at the world famous Doce Pares Club of Cebu under the guidance of the Canetes. Her years at Doce Pares awakened her martial spirit. Aside from learning her native art of Eskrima, she was also introduced to other Asian martial arts like Judo and Aikido. It was during one of her training sessions at Doce Pares that she met Grandmaster Bonifacio “Loloy” Uy, the former sparring partner of Supreme Grandmaster Cacoy Canete and the founder of BDU System. That brief encounter led to an invitation to train with Grandmaster Loloy, a rare opportunity she cherishes up to this day. Her intense one-on-one training with Grandmaster Loloy polished her skills and deepened her understanding of the martial arts. With her sight set on the World Championships, she persisted and put up with the rigorous training with Grandmaster Loloy who continued to challenge and pushed her limits. In 1992, Edie won the World Championship in full-contact sparring. Competing with an injured wrist and weighing a mere 96 pounds, she competed against much heavier opponents in a heavier division. After her successful shot at the Worlds, she was pushed into teaching Eskrima when asked to form a team to compete in a series of local and national tournaments to scout for new talents for the Philippine team. She formed and founded Kampilan, a team that won the Sinulog International Championships in 1993. While training and coaching a championship team, she discovered a new passion – a passion that led her to teach and train countless men, women and children the art of Eskrima. Kampilan on the other hand, evolved into a revolutionary and highly effective system that bridged the gap between traditional and sport Eskrima. Serving as Tournament Director of Quest for the Best, a series of Eskrima tournaments held in Cebu, she pioneered a system of rating referees and judges geared to standardize tournament officiating in local, national and international Eskrima tournaments. After taking a break from competition for a number of years to concentrate on teaching and refining her craft, Edie tried her hands at Eskrima forms competition. In 2010, she trained and coached the Kampilan Eskrima Team that saw action during the U.S. Nationals in California. She won the Nationals in her division and earned a slot in the U.S. Team with two of her students. She went back to compete with her Kampilan team and won the Nationals again in February of this year making her the current 2012 U.S. National Champion in her division. She’s a member of the 2012 U.S. Eskrima Team along with four of her students who will compete in the World Championship in Las Vegas in July. Along the way in her martial arts journey, Edie put together a practical, highly effective and easy to learn self defense system called STRIVE – Survival Techniques & Response In Violent Encounters. Aside from teaching regularly at Lions Martial Arts in Grayslake, she holds Eskrima and practical self defense demos and seminars. A visual artist, Edie also designs training equipments and safety gears for sparring and competition.