Embodying the true qualities of a “VIA” (Vision, Insights and Achievements) Woman of the Year, Dely, Daisy or Dalisay Villalon) is a fitting tribute to this highest-acclaimed title for the Chicago Filipino Asian American Hall of Fame Awards. She has demonstrated uncommon, innovative and civic responsibility and has excelled and achieved so much for the encouragement and betterment of the Filipino /Filipino American Community, making her the comunity’s pride, the inspiration the role model to many people.

The eldest of eight children (5 sisters and 2 brothers) of Federico and Librada Manuel of Niugan, Angat, Bulacan, Dely is a registered nurse graduate of Manila Central University with a Bachelor of Science in Nursing degree. She took up post- graduate studies at the University of Illinois, though she did not get the Master’s degree in Nursing due to family responsibilities. She has worked as Director of Nursing of Nursing Homes and Hospice Group. She worked until she was 78 years old. Dely was married to Dr. Enrique Villalon, Jr. They migrated to US in 1967 and had five children and divorced in 1983, and both of them did not get remarried. Sadly, Dr. Villalon passed away in 2013, followed by her middle daughter, Liberty, who passed away also in 2018 at 46 years old. They have 16 grandchildren. She has been residing in Northbrook, Illinois, since 1983.

She thanks GOD for all HIS BLESSINGS and extend her deep appreciation to her family, friends and everybody who have been supportive and kind to her and her family all these years

Turning an epic 81 years of age, after sharing her well-endowed traits of beauty, strength, hard work, determination and community sense of empowerment, this Grande Dame of our community is passing on a great legacy, in making this beautiful world a better place to live in. 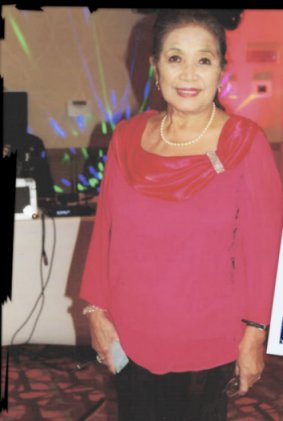 Dely with her five grandchildren living at home with her who are children of son Ricky, L-R: Erika, April, Liberty Rose, Maymay, and Dad Enrique IV, and Biggy, the family pet.