Just a week after Jimmy Kimmel condemned Will Smith for slapping Chris Rock across the face at the Oscars, the late-night host called for the actor to give the same treatment to Rep. Marjorie Taylor Greene (R-GA).

Last week, Stephen Colbert stirred up some faux-controversy by suggesting that President Joe Biden should have pulled a Will Smith on Fox News’ Peter Doocy for asking yet another “stupid” question at a recent press conference. Jimmy Kimmel waded into similar comedic waters Tuesday night.

After noting that Sarah Palin “seems downright quaint” compared to the “monsters” she might be joining in Congress soon, Kimmel turned his attention to Rep. Marjorie Taylor Greene (R-GA), who called her Republican colleagues who plan to support Judge Ketanji Brown Jackson’s Supreme Court nomination “pro-pedophile.”

“Any Senator voting to confirm #KJB is pro-pedophile just like she is,” Greene wrote, later calling out the three Republicans by name.

“Murkowski, Collins, and Romney are pro-pedophile,” she added in another tweet. “They just voted for #KBJ.”

After sharing the tweet with his audience, Kimmel asked, “Wow, where is Will Smith when you really need him?” (What’s Up Today?) 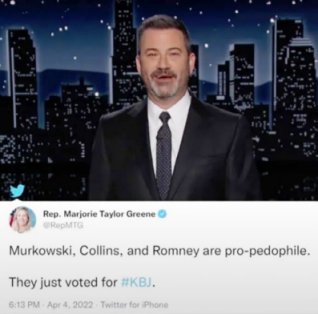 2022-04-01
administrator
Previous: Know Your Rights: What are your rights when you overstay your Visa?
Next: Marcelito Pomoy In Concert: A Revelation