According to Google (and it must be true!), only 5 -6 percent marriages last for fifty years. By any calculation, 50 years is really a long time. That’s about half a century!

Nick and I were married way back home, in Vintar, Ilocos Norte on June 18, 1967. Fifty years later, our children insisted on a celebration, no matter how simple. June 18 fell on a Sunday and all it took was the temerity to ask Father Robert Rizzo, Parish Priest, St. Hubert, Hoffman Estates, Illinois, to take our vows in time for the Sunday Mass, and he said okay. Father, we asked again, our eldest son is the Musical Director at the Our Lady of Perpetual Help in Tampa, Florida, if he can play for other couples on their Weddings, can he come and play for us? And he said Yes again! And, Father, can he not bring with him their cantor, baritone Vic “ Dimple” Omila, Jr., said to be one of the best in Tampa, if not the whole of Florida? And he said,by all means! And that was what happened! With support from the St. Hubert Choir, under the baton of Ed Magistrado, Musical Director, we had a perfect mass for our Golden Wedding Ceremony, officiated by Father Rizzo, assisted by Deacon Tim Allen.

The ceremony was attended by close members of the family and friends, so heartwarming as they came from far and near just to witness us say, “We do”, again. We must have same so long ago that we even forgot when to hold hands, and to recite after Fr. Rizzo, “Repeat after me,” upon cue notwithstanding What do you expect, we are now septuagenarians!

If those were the lighter moments, one of the most moving for us, aside from taking the vows again, was when Vic did “Ave Maria” by Francisco Santiago (for me, the best version so far) with our son, Nick, Jr .,accompanist. Fifty years ago, it was sung at our Wedding by Nick’s cousin Prussia Flores, now Mrs Streegan then fresh from college.

Incidentally, ours must have been the last Golden Anniversary Fr. Rizzo would officiate, as he was to retire end of June. How lucky could we get!

The Reception at the Bartlett Community Center was set up for the occasion by the brother- and- sister team, Nick & Maripaz, together with husband Jonathan Plantig and their cousin Engr. Vernon Ramiro Aliga, from Atlanta. It was a DIY event, including the catering arrangements and they had to stick to their guideline that you don’t have to be lavish to put up a pleasurable party. Thank you, thank you, thank you, with special mention of Marie’s colleagues from the Good Shepherd Hospital and Norridge Nursing Home. {Foremost, we would like to extend our sincerest appreciation to my cousin Florecita Pacis & Manong Conde Valignota for playing hosts to as many as five couples from out of town in a matter of five days. Champion!)

For the Opening, grandniece Morgan Fontela did some Polynesian numbers, to complement the icebreaker community singing of “Hawaiian Wedding Song”. Emcee for the evening was my brother-inlaw, retired Sycip Gorres& Velayo (SGV)principal, Engr. Alfonso ‘Tito’ Aliga, Jr. who came all the way from the Philippines with wife Elenita. Best Man Wedding ‘67, cousin Reggie Pacis, gave the Toast, while writer cousin Primo Pacis, said the Prayer Before Meals. Both from California.

Shown over Dinner was the video clip engineered and architected albeit by long distance, by our two younger children in the Philippines, Roland/ Cecille and Deanna Marie. ‘Wished you were here, though! Thank you, too, to our well-wishers here and there and everywhere. We’ll cherish your loving greetings all our lives!

Cousin Elsa Pacis Fontela did “Gratitud” on the piano which was reminiscent of the childhood days we spent as an extended family, living under one roof for a long time. Friday night then was always a lil’ night of music, as each of us cousins (four of them and three of us) was expected to showcase the latest piano piece or the latest song we learned in school. Worth mentioning is that both our mothers (sisters) were teachers and that their Dad was perhaps the best harp player in town/province. Suffice it to say, the family that sings together stays together. Come to think of it our growing up together had spawned this family love, which flourished beyond borders of time, distance and generations.

Her sibling Florecita Pacis Valignota, reprised our favorite songs with a duet of “One Alone” ( by Sigmund Romberg) and “Will You Remember?” from “Springtime” with baritone Vic Omila,Jr. ; Nick,Jr. on the piano.

Impromptu though it was , next number, her daughter Dr. Kellyjoy Valignota, from Philadelphia, engaged the audience, with her duet of Celine Dion’s “ My Prayer”,likewise with Vic Omila, Jr.

The Keynote Address, delivered by Elenita Ramiro Aliga, my only sister, tugged my heart to no end as she acknowledged not only the guests and loved ones who were present as well as those who were not , but also those who could not, especially our Mom and Dad, and our late brother Rolly who gave me away in marriage 50 years ago to Nick, his classmate in High School.

To reiterate her love messages, she too indulged her husband Tito for a duet of their theme song “If I Loved You”, from “Carousel”.

As icing is to cake, Rep. Fred Crespo, of Hoffman Estates, assisted by his wife Dorothy, awarded the couple with a Resolution of Congratulations from the Illinois House of Representatives.

We had the Anniversary Dance to the meaningful strains of our theme song,” Let the Rest of the World Go By” from “ Out of Africa” -”We’ll build a sweet little nest, somewhere in the West” (We did! Didn’t we?) Then the offering of 50 long- stemmed yellow roses, amidst the serenading from relatives town mates from good ol’ Vintar, and later joined in by friends in Chicago and elsewhere -from the neighborhood, church and community. The event not only doubled as a celebration and reunion of sorts but tripled as a reckoning of career, community work and friends we have made!

AFTER THE PARTY, niece Josephine Agbayani, emailed from San Francisco and said it best,” Not everyone can have the chance, like you, to have an extended run of their love story.”…..”Everyone had an outstanding talent to bring. It was like watching a Tony Awards Night.”……” You deserve all the attention. It was a love fest. As Sally Field said when she accepted her Oscar award: “You must really like me!” You bet, we just could not help blush blush blush , reading, although at the same time patting our backs, convinced “They must really like us!” Indeed, there is no greater luxury in life than to love and be loved. God and good people are everywhere, and they are known as family and friends.

Our story of fifty years may be, to some, a lackluster, humble tapestry, but to us, it is one woven with love, enlivened by threads of gold. That’s what Golden Anniversaries are for! Our souls still complete each other; our hearts still beating as one, we are among the lucky 5-6 % who made it! (After the ceremony, Fr. Rizzo asked my co-celebrant our secret for having stayed that long, and without batting an eyelash, Nick told him it’s praying together at night before we go to bed.)As we look forward to the future, I echo the invite in his closing remarks: “See you on our Diamond Anniversary!” 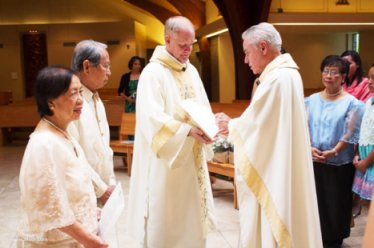 Celebrants singing and dancing to their theme song “Let the Rest of the World Go By”. 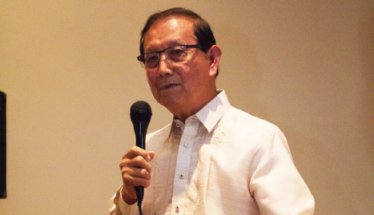 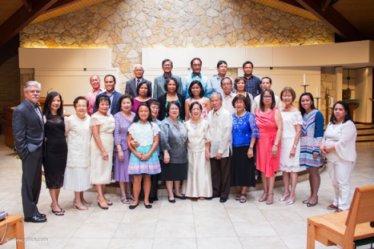 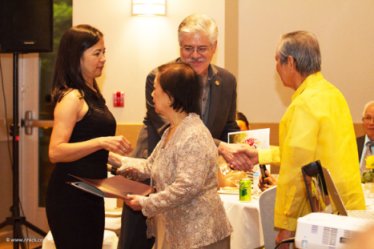 Rep. Fred Crespo of Hoffman Estates, assisted by wife Dorothy Acacio Luz Crespo, awards couple with a  Certificate of Congratulations, from the House of Representatives, Illinois. 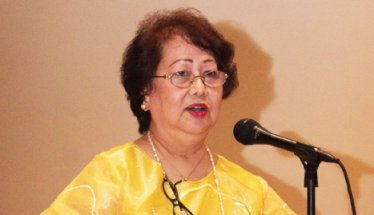 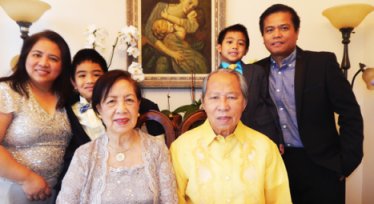 With grandkids Kix & Lance and their parents Marie Paz and Jonathan Plantig. 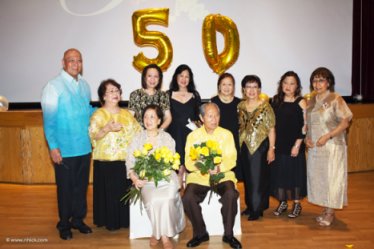 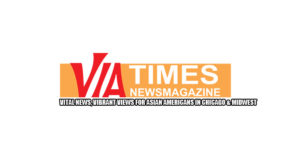 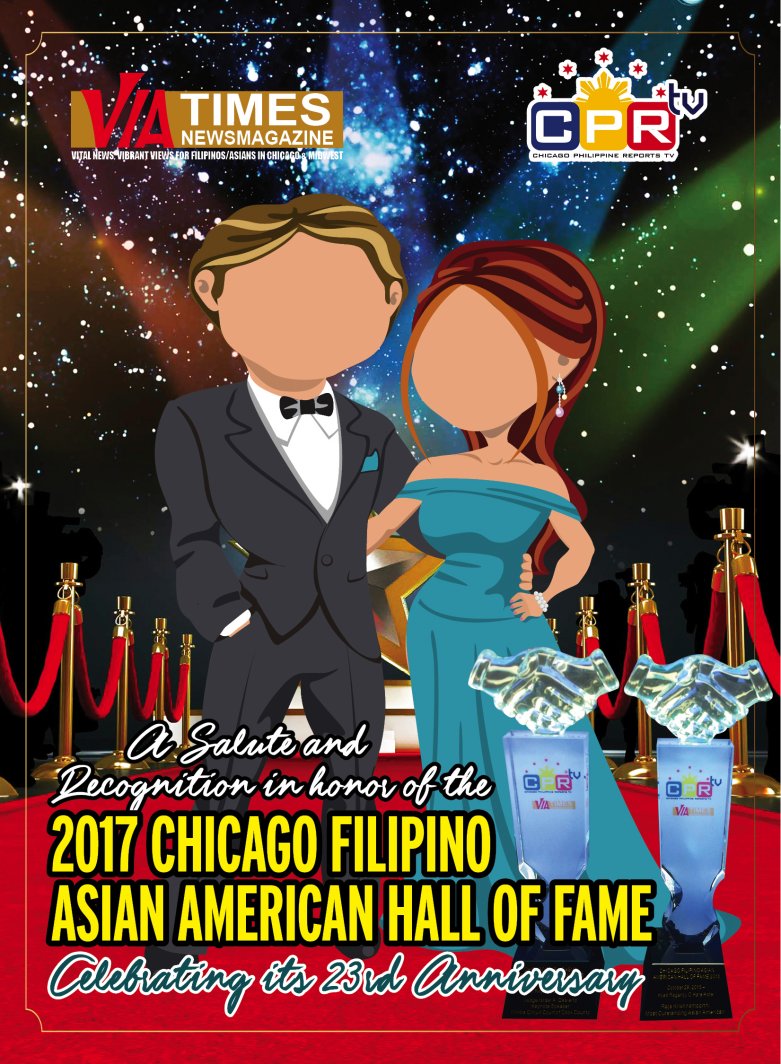