In 2016, after surveying over 7,000+ residents of the Chicago area, only 30 Asian Americans were counted in Chicago’s Health Census. The community was completely underrepresented to the organizations that need information about different health issues to design future programming and outreach within Filipinx and Korean communities in the Chicagoland area.

This year, the Filipino Young Leaders Program (FYLPRO) has partnered with the Chicago Department of Public Health to reach out to the Filipino community for the new Chicago Asian Health Survey. And, participants will be compensated $25 for completing it. To be eligible to take the survey, participants need to be 18+, identify as Filipinx or Korean and reside in the Chicagoland area. The survey is anticipated to take 20-30 min to complete. At the beginning, please select “FYLPRO” when asked where you heard about the survey. Instructions on how to claim your $25 from FYLPRO is available at the end.

We need to ensure our communities get counted! Access the survey now by going to the webpage http://bit.ly/fylproHS.

Also, applications for the 2019 FYLPRO Immersion program to be held on November 23-29 in the Philippines are now being accepted by the Philippine Embassy in Washington DC.

Launched in 2012, FYLPRO is a joint initiative of the Philippine Embassy and Consulates General in the United States, the Ayala Foundation, Inc. (AFI), and the FYLPRO non-profit organization where, each year, ten (10) outstanding young Filipino American professionals across the United States are selected to take part in a weeklong immersion program in the Philippines. The delegates will have the chance to meet and interact with Philippine government officials and various leaders in business, arts and culture, and civil society.

The delegates will likewise have the opportunity to connect with their Filipino heritage through community service, cultural tours, and other civic activities.

Young leaders between the ages 25 and 40 are encouraged to apply. They must demonstrate leadership skills within their school, community, workplaces, or other areas of involvement; and have the potential or have demonstrated involvement in the Filipino American community, or in issues and/or activities that align with the interest of the Philippines.

“We consider the next generation of Filipino-American young leaders as partners in further advancing our country’s development, and in strengthening the dynamic relations between the Philippines and the United States,” said Philippine Ambassador to the United States Jose Manuel G. Romualdez, adding “The growing FYLPRO alumni network here in the United States composed of young professionals in the fields of business and marketing, public affairs, theater and the arts, multimedia and entertainment, and some even serving in the US government reinforces the bridge that connects our two countries.”

Check out FYLPRO.org online for the 2019 application requirements. For those in Chicagoland, an Information Session will be held on Aug 15, 2019 Thursday at the Kalayaan Hall of the Philippine Consulate General in Chicago, 122 S Michigan AveChicago, IL 60603.

The Bavarian Bierhaus in Glendale was host to the very first Filipino Fest in Wisconsin organized by the Filipino American Association of Wisconsin. Hundreds of Fil- Am locals came with their families as early as 11am to catch the all-day entertainment at the main stage featuring local cultural dance groups, singers, violinists, dancing moms as well as reigning beauty queens, Joey Warren, 2019 Mrs. Wisconsin and Sophia Traxler, 2019 Miss Jr United States. The fairgrounds was peppered with various stalls selling Filipino branded items like shirts and baseball caps, while the main concession stand, or should I say kitchen, fire-roasted Lechon (roasted pig) and Lechon Manok (roasted chicken) which they sold with rice for seven dollars a plate. Of course, beer was also available all day!

The event was capped by a back to back performance by Filipino Celebrity Geneva Cruz who sang her greatest hits including “Pangarap Ka”, “Ang Gaan Gaan Ng Feeling” and “Kailan” and Chicago-based SamaSama Project who performed a set of traditional and contemporary Filipino songs before Cruz and then closed with an energetic set of non-stop dance music live bringing everyone back on the dance floor one last time for the evening.

After they close their Summer performances in Chicago at Downtown Oak Park on Aug 8, SamaSama Project will be back for FAAWIS’ 47th Annual Dinner Dance on September 21 at the Italian Community Center in Milwaukee.

Congratulations to FAAWIS President Jan Rosell, her team of tireless volunteers and the Filipino American Community in Wisconsin!

FYLPRO Alumni Louella and Baron Cabalona promoting the Chicago Asian Health Survey to attendees of the Consular Outreach at Seafood City Chicago on June 29, 2019 and assisting them fill out the survey. 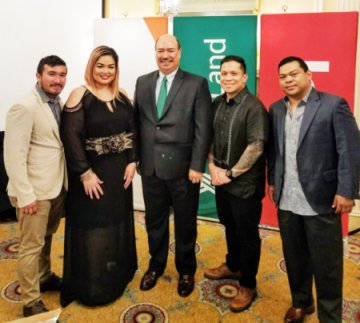 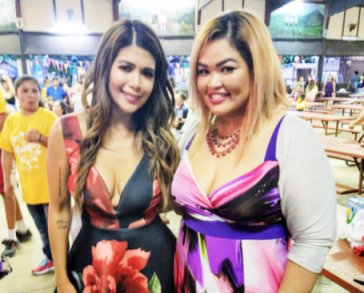 Geneva Cruz, a California-based Filipino celebrity and Louella Cabalona of SamaSama Project posing for the camera in between performances at the FAAWIS Filipino Festival in Glendale, Wisconsin.

The Filipino American Association of Wisconsin members and with the singer and musicians of the band SamaSama Project during the first Filipino Fest in Wisconsin last July 27, 2019. 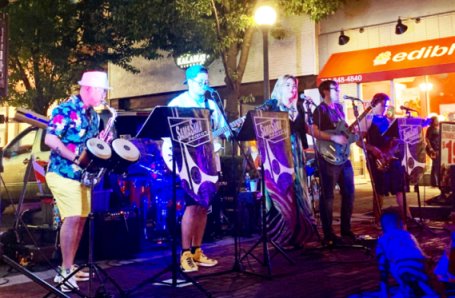