Joe Biden has, once again, fulfi lled his old promise to the Filipinos that he would honor Filipino veterans of war. When he was Vice President and Senate President, he helped shepherd a bill to fi nally recognize and compensate Filipino WWII veterans who had fought under the American fl ag but denied benefi ts for 70 years.

Then, he chose a Filipino- American veteran of the Iraq War, Gina Ortiz Jones of San Antonio Texas as the new Undersecretary of the U.S. Air Force.

Gina is battle-tested, not only in the sensitive intelligence warfare in the Middle East, but also in the political arena. It is all too convenient for ultra-conservative critics to overlook Gina’s impressive resume and smear her as a gay person, just as they did during the campaign. We worked very hard for Gina when she ran twice for the US Congress and almost made history against all odds, running in the worst and terribly gerrymandered district that spanned 500 miles from San Antonio to El Paso in a conservative red state. She waged a hard and excellent campaign covering the 500-mile wide district and lost by only 900 votes to an established and well-funded Republican congressman Will Hurd. Independent political analysts say that, if not for her being gay, she would have won the district.

Be that as it may, her appointment as Undersecretary of the Air Force, a position that she is eminently qualifi ed for, will be a huge source of pride for Fil-Ams and the Philippines. She will be the fi rst Filipino-American immigrant to hold a high Undersecretary position in the Federal government. Regardless of our own political affi liation, we should all unite behind Gina and support her nomination. It will be a feather in all our caps. 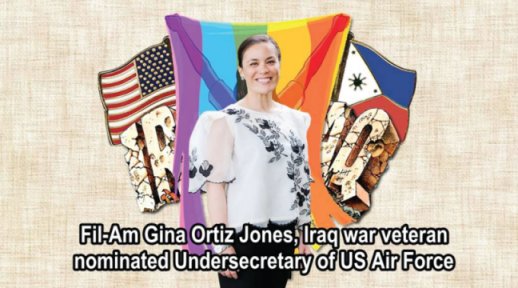