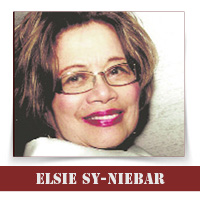 *THEY CAME TO SAVE LIVES; sadly, SEVEN of them lost their own lives in a tragic car accident last Jan. 20, in Cebu City…

*CHICAGOAN Medics and Friends celebrate the 40th Day of Prayer for their friend and colleague — Dr. Nunilo G. Rubio, one of the seven fatalities…

*March 20 is Primary Election Day in Illinois; please go out and vote;

*Are DEMOCRATS truly sincere to protect the DACA DREAMERS?

They CAME TO SAVE LIVES but LOST THEIR OWN. I’ve said this phrase before not having a clue that it will be repeated two years later. This time with seven fatalities. The first, PHILIPPINE MEDICAL ASSOCIATION OF CHICAGO (PMAC) tragedy happened last January 2016, when the very likeable Dr. Joe Delfin lost his life to a fatal heart attack the following morning after the PMAC finished their weeklong medical mission in Ologapo, Zambales, Dr. Delfin’s home province. And, who was the first colleagues who came to help? No less than his best friends, Dr. Nunilo Rubio and his wife, Dr. Elenita Rubio. It was the Rubios who told this writer, about what happened to their beloved friend “Joe,” a very jolly doctor who loved serving the sick and poor Kababayans back home.

And who would ever think that two years after the Rubios did their very best to help their Brod Dr. Deflin, Dr. Nilo would follow him? Big thanks to the Lord for sparing Dr. Nits, miraculously. Yes, indeed, considering the extent of her physical injuries from that fatal van accident in Cebu City last January 20, she was saved. Unfortunately, her beloved “Nilo” was not, together with his fellow medical Mission Volunteers namely: Aurora Gagni, RN, from Orland Park, and some first-time volunteers from New York, Bernilda Roxas, RN; Dr. Huang and his RN wife; another couple, Dr. Pascual and his wife, RN/

Oh, yes, I love the Dr. Rubios like my own family. They were our Silver Wedding Anniversary Ninang and Ninong (Sponsors) and family physicians for several decades until their retirement two years ago. (Now, my doctor is their son, Dr. Noel Rubio, who was a kid when I first knew the family). My late Mother who passed away at 93, loved the Rubios so much she would insist on going for a “check up” although it was not her time, yet. I will always remember the soft-spoken “Ninong” Nilo. Both husband and wife are so kind and generous, they never say “no” to donate for a good cause. I will miss “Ninong Nilo’s” gentle voice and smile which did not come from his lips but from deep down in his heart. As a Christian, I have faith that he is now in the Hands of the Lord.

The 40th Day of Prayer last March 1, celebrating the Death of Dr. Nunilo Rubio, Sr., was attended by many of his medical colleagues, family members in Chicago, relatives and friends. Dr. Noel Rubio and his wife, Lizette, Aunts and Uncles, Cousins, hosted the celebration with a mass at the Basilica in Skokie, followed by lunch at Maggiano’s Skokie. Before writing this column, I spoke with Dr. Noel to have an update about their Mom, Dr. Nits, who is recuperating in Manila.

Briefly, here’s what Dr. Noel told me: “Thanks for all the prayers, our Mom is doing fine although she cannot walk yet. She is not allowed to stand up and put weight on her body. She’s out of the hospital and stays in an apartment very close to the hospital. Mom has a therapist and an orthopedic physician who visit her everyday. She is surrounded by her sisters, our Titas, like Tita Annabelle, Tita Merly, Tita Normy, Tito Roly, a host of others, everyday. Mom is getting better everyday. With our prayers, your prayers, we hope to have Mom back home to Chicago in June. My brothers – Nunilo, Jr. and his wife, Cheryl; me and Lizette, Nathaniel and Leticia, are asking for your continued prayers for our Mom, who we know misses her grandsons (from Nilo, Jr. and Cheryl), Peter and Xavier. And, on behalf of our family, I am extending our huge Thank you for all your love and prayers and for attending Dad’s 40th Day of Prayer.”

The Fate of the DREAMERS: Thoughts from our Guest Political commentator, DON AZARIAS:

“The Democrats –bleeding hearts as they are, are trying to give the DREAMERS the impression that they are working to save them from deportation; putting up before the public, a compassionate face. But don’t be fooled. It has more to do with their political strategy, pretending to be the champion for the advocacy of the downtrodden and the DREAMERS. The Democrats, in reality, have no real plan to save the DREAMERS. They are just using them as pawns to get their sympathizers’ and supporters’ votes under false pretenses.

Flashback to 2009 when Democrats controlled the White House, the Senate and the House with a majority so substantial that they could have passed the Deferred Action for Childhood Arrivals (DACA) legislation but they did not. Why? Because they opted instead to pass the health care legislation known as the OBAMACARE. They made a promise, however, of resurrecting the issue and push through the DACA legislation after the 2010 midterm elections.

Unfortunately for the Democrats, they lost control of the House in 2010 and the Senate in 2012. President Barack Obama and the Democrats, as a result, were unable to get the DACA legislation through Congress. And that is now DACA’s current status. President Donald Trump has offered repeatedly to work with Congress to fix DACA – a position that goes against the Republican Party and many in his base. But the Democrats in Congress are hell-bent on preventing progress for the same reason that they did in 2010. And that’s to improve their chances of winning both Houses in the 2018 midterm elections. This is not about compassion; it’s about votes. So, Democrats, stop fooling those DREAMERS and the American people. Don’t blame Trump and the Republicans. Stop passing the buck! (Don Azarias)

Regardless of your Party Affiliation – Republican, Democrat, Independent, please go out and vote on March 20, or any day before March 20. Election precincts are open since March 6. Today, America’s future hangs on the balance. Your Vote can help move mountains. As Americans, it is our duty to go out and Vote for politicians you believe can change and improve the political system for the good of our beloved America, more so for the hard-working class to give our children a bright future.

On a personal note, as a VIA TIMES Staffer since it was founded 35 years ago, I am very proud and happy to receive calls and inquiries from mainstream candidates and their staff about VIA TIMES’ editorial contents, advertising rates, and readership. This shows the candidates’ awareness on the importance of community press like VT. The only drawback is, most if not all, inquiries came during our deadline. So I could not accept their advertisements. For posterity, let me share two emails below:

From Cook County Judge Oran F. Whiting, for re-election, (condensed for space) sent by Sarah Eucalano, campaign press associate: “Judge Whiting worked hard for his law education in preparation to be a judge for cook County, his home. He earned his law degree from Georgetown University, and his undergraduate degrees in International Relations and Economics from the University of Pennsylvania. He is the first African-American attorney hired at the world’s largest law firm in 1986. Judge Whiting gained over 30 years experience practicing law holding the following positions: Counsel to the Speaker of the House of the Illinois House of Representatives; Illinois Court of Claims Commissioner; hearing officer appointed by Secretary of State Jesse White, and as general counsel of Chicago’s historic Mercy Hospital.

• From Allie Lichterman, campaign manager for Ram Villivalam, Democratic candidate for State Senate in the 8th district of Illinois. She wrote: “Our campaign has been gaining a great deal of momentum. Ram has been endorsed by six members of congress, The Chicago Tribune, and The Chicago Sun Times, among others. His candidacy is especially exciting because if elected, he will be the first Asian American state senator in the history of Illinois and the first South Asian ever elected to the IL General Assembly. We’re interested in placing an ad in Via Times.”

Personal from this columnist: We, as Asian Americans, Ram’s victory would be another “feather in our cap.” Let’s help him if you are a resident in his district.

And, of course, let’s not forget former governor Pat Quinn, who is running for the office of State Attorney General. He is a true friend of Asian Americans. When the Rizal Center held fundraising for the devastation in the Philippines, a few years ago, then, as the Governor, Pat Quinn came to the Center and extended help.

Three very strong candidates who are working hard to take over Gov. Bruce Rauner’s seat are billionaire JB Prietzker; millionaire Chris Kennedy, nephew of the late President John F. Kennedy, and middle class but suave Daniel Biss. These three “top candidates” are expected to have a close bout this March 20.

Our dear friend State Secretary Jesse White is UN-opposed! Speaks well of how much people TRUST him. Two ladies I think are also UN-opposed are Cook County Treasurer Maria Pappas and Cook County Recorder of Deeds (CCRD) Karen Yarbrough who’s running for Cook County Clerk. CCRD will be merged with Cook County Clerk after the November election. Please go out and Vote for the candidates who will work for us – THE PEOPLE. 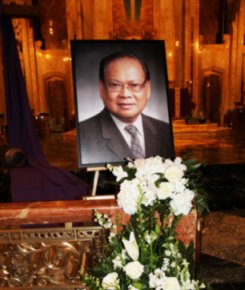 ALTAR PHOTO of Dr. Nunilo I. Rubio, first used at his funeral mass in Bacoor City, Cavite, his hometown. 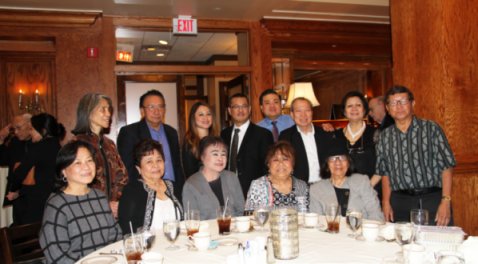 Above are some PMAC medics who attended the 40th Day of Prayer for their beloved colleague, Dr. Nunilo I. Rubio. Sorry, this columnist could not identify everyone except, front row, two ladies at extreme right– Estela Cave and Dr. Remy Escalona. At back, 2nd from left, Dr. Virgilio Jonson, Lizette and Dr. Noel Rubio, second son of the deceased who hosted the prayer; last two at right are Dr. Cave and Dr. Manny Escalona, who took all the pictures for the prayer celebration. 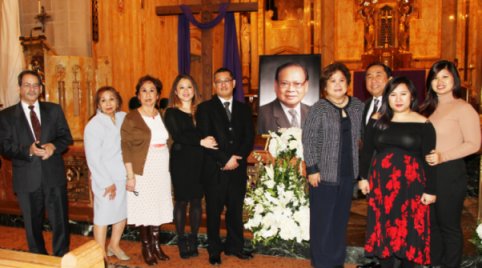 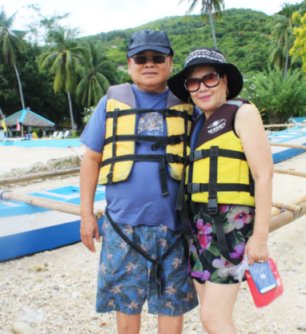 Dr. Nunilo and Elenita Rubio before the fatal accident which took the life of Dr. Nilo Rubio. 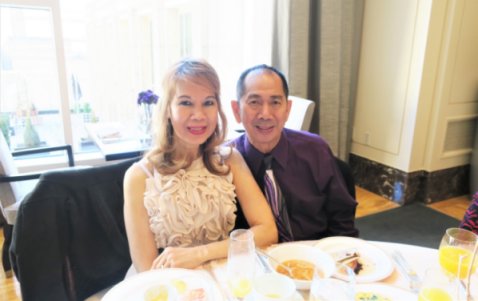 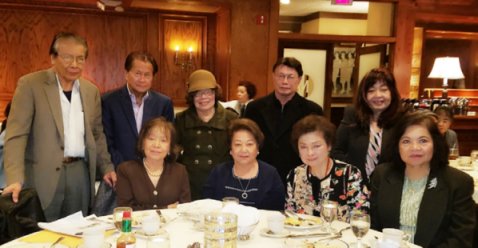 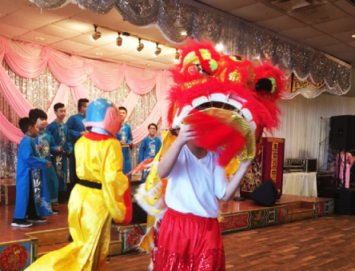 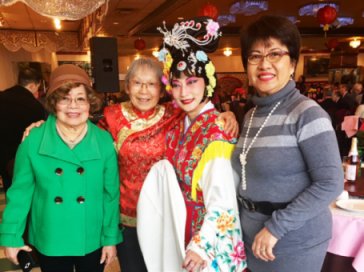 2018-03-01
administrator
Previous: ExSpouse Benefits and How They Affect You
Next: CPRTV Channel