In celebration of National Women’s Month in the Philippines and International Women’s Day, would like to share some information about this celebration through Wikipedia (my last wonderful resort), as this Vibes lady is very, very sicko right now, Last year, the celebration’s theme in the Philippines was, “We Make Change Work for Women,” highlights the empowerment of women as active contributors to and claimholders of development. It endeavors to bring together women and girl leaders from various generations towards a collective agenda of empowering all women and girls.

Also sharing with you my featured story as an award-winning journalist and community leader. #WomenMakeChange, together with Attorney Aurora Abella-Austriaco and Mae Flores, 2020 Women awardees.

International Women’s Day (IWD) is a global holiday celebrated annually on March 8 to commemorate the cultural, political, and socioeconomic achievements of women. It is also a focal point in the women’s rights movement, bringing attention to issues such as gender equality, reproductive rights, and violence against women.

IWD originated from labor movements in North America and Europe during the early 20th century. The earliest version was purportedly a “Women’s Day” organized by the Socialist Party of America in New York City February 28, 1909. This inspired German delegates at the 1910 International Socialist Woman’s Conference to propose “a special Women’s Day” be organized annually, albeit with no set date; the following year saw the first demonstrations and commemorations of International Women’s Day across Europe. After women gained suffrage in Soviet Russia in 1917 (the beginning of the February Revolution), IWD was made a national holiday on March 8; it was subsequently celebrated on that date by the socialist movement and communist countries. The holiday was associated with farleft movements and governments until its adoption by the global feminist movement in the late 1960s. IWD became a mainstream global holiday following its adoption by the United Nations in 1977.

International Women’s Day is commemorated in a variety of ways worldwide; it is a public holiday in several countries, and observed socially or locally in others. The UN observes the holiday in connection with a particular issue, campaign, or theme in women’s rights. In some parts of the world, IWD still reflects its political origins, being marked by protests and calls for radical change; in other areas, particularly in the West, it is largely sociocultural and centered on a celebration of womanhood.

IWD initially had no set date, though it was generally celebrated in late February or early March. Americans continued to observe “National Women’s Day” on the last Sunday in February, while Russia observed International Women’s Day for the first time in 1913, on the last Saturday in February (albeit based on the Julian calendar, as in the Gregorian calendar, the date was March 8). In 1914, International Women’s Day was held on March 8 for the first time in Germany, possibly because that date was a Sunday. As elsewhere, Germany’s observance was dedicated to women’s right to vote, which German women did not win until 1918. Concurrently, there was a march in London in support of women’s suffrage, during which Sylvia Pankhurst was arrested in front of Charing Cross station on her way to speak in Trafalgar Square. 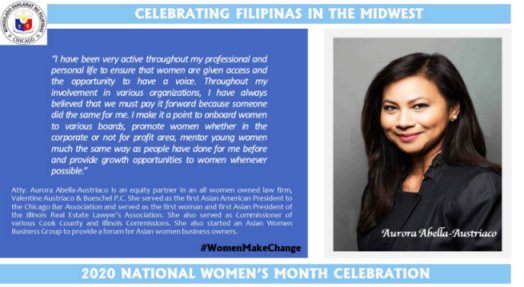 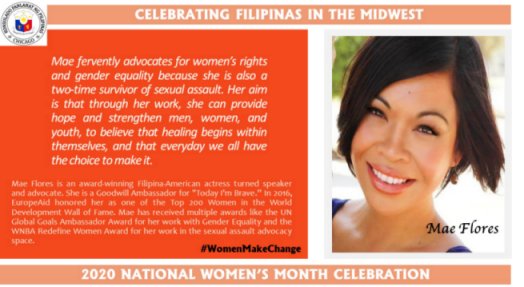 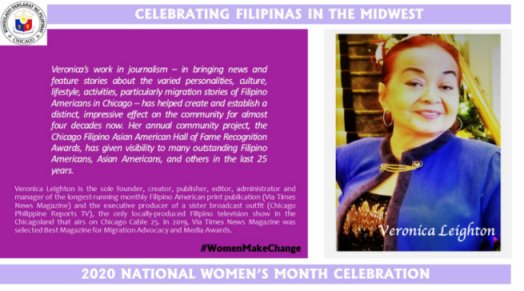 In celebration of National Women’s Month in the Philippines and International Women’s Day on 8 March 2020, the Philippine Consulate General in Chicago is proud to chronicle the accomplishments and advocacies of key Filipina-Americans in the Midwest. The celebration’s theme in the Philippines, “We Make Change Work for Women,” highlights the empowerment of women as active contributors to and claimholders of development. It endeavors to bring together women and girl leaders from various generations towards a collective agenda of empowering all women and girls.