First Lady Jill Biden is stoking ire from some social media users after wearing a fascinator instead of a hat to Queen Elizabeth II’s funeral.

Accompanying her husband President Joe Biden, the first lady, 71, arrived to Westminster Abbey in London Monday donning a black Schiaparelli bespoke suit and fascinator — a piece of headwear requiring a clip, comb or headband to stay in place.

Fascinators are “often worn by women attending formal occasions such as weddings and events,” according to Fascinators Direct, an online collection of hats and fascinators.

You often see fascinators at joyous events, such as weddings. While they can be worn to somber events like funerals, the more accepted etiquette would be to wear a hat as a sign of respect. Twitter users were quick to call out Biden on the apparent fashion faux pas.

Twitter user @woobs98765 wrote that a “big black bow in your hair” isn’t appropriate for a funeral.

“Why did she do that?” asked @JoBaillie4.

“That tacky headband bow in her hair at a state funeral,” wrote @ TruthsOverLiars. “This isn’t high tea.”

“why is jill biden wearing a party bow on her head?” asked @ Airstrip_0ne.

Other users came to Biden’s defense, including columnist Doug Sanders who said on Twitter that “Black fascinators are perfect appropriate funeral garb, by the way.”

“I see on the screen that Jill Biden has just entered wearing one,” Sanders continued. Twitter user @_oftherisingsun wrote that Biden “looks so cute with that bow hairband.”

The world watched as thousands gathered to attend the queen’s funeral, marking the official end of a historic 70-year reign. The queen was later laid to rest in a private family service beneath St George’s Chapel with her husband of 73 years; her sister, Margaret; and her parents.

In the official condolences book, Biden wrote, “Queen Elizabeth II lived her life for the people she served with wisdom and grace,” according to a photo tweeted by New York Times’ White House correspondent Zolan Kanno-Youngs.

Black hats were difficult to find ahead of the queen’s funeral, according to local outlets. The Daily Mail reported Princess Beatrice left a hat store empty-handed amid a shortage of black hats in London. Both Princess Kate, the wife of Prince William, and her daughter Princess Charlotte, 7, wore sophisticated, short-brimmed black hats wrapped in a black ribbon. Kate’s featured a traditional mourning veil.

Like Kate, Meghan, Duchess of Sussex, wore a black dress and a hat, as well as her signature cape. 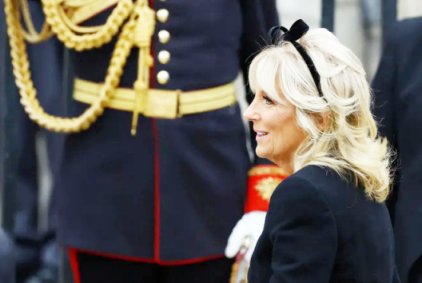