Vic Herrera has been fishing in Pasig River since the late 1970s. He knows the ebb and flow of the once biologically dead river, which he said “dies” or becomes foul-smelling during summers.

But as the river is continuously rehabilitated by government and volunteer organizations, various fish species have been spotted again.

In fact, the fish in Pasig River have been making headlines as local fishermen boast of catching “giant,” “monster” fish including a“catfish-zilla.”

Herrera says locals are delighted by the presence of larger fish, such as cream dory, catfish and tilapia, especially since fishing has become a form of recreation in their community.

When ABS-CBN News visited one Thursday, Herrera catches four small catfish (kanduli) with his worm bait. It is a small catch compared to a month ago when they were catching big tilapia.

He points to another fisherman, Aldrin Mahinay, who recently caught a cream dory nearly the size of a child.

“The fish in Pasig River are highly tolerant to pollution levels,” says Dr. Luis Garcia, a professor at University of the Philippines specializing in aquaculture and fish physiology. Among his examples are tilapia, big head carp (Imelda) and kanduli.

Garcia says the insistence of local residents to eat the fish in the polluted river will only result in long-term illnesses.

He says it’s different from food poisoning where you immediately see the effects.

However, the PRRC says it will take several years before the river is fully rehabilitated, which includes the comprehensive sewage treatment system.

PRRC’s Goitia says besides industries, they will have to ask for the help of the local residents themselves, especially since longterm plans include relocating communities and turning the riverbanks into esplanades with greenery. 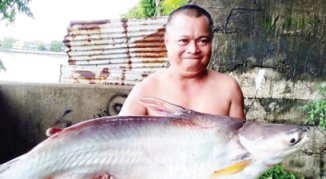 2019-09-01
administrator
Previous: Rejected or Elected
Next: China, The Encroaching Dragon