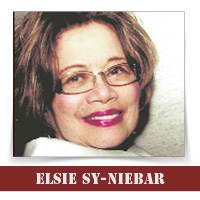 *Get ready for the ‘Cinderella Ball’ SILVER ANNIVERSARY of the CHICAGO FILIPINO ASIAN AMERICAN HALL of FAME GRAND CELEBRATION! PH Ambassador to US, Hon. Jose Romualdez, will serve as the Keynote Speaker & Recipient of Hall of Fame Award

*Hats off to our indefatigable Via Times Publisher & CPRTV Producer Ms. Veronica B. Leighton! And her better-half, Joe Mauricio! Mark your calendar: Saturday, Nov. 9 at the Grand Hyatt Regency O’Hare!

CHICAGOANS were not really surprised when Mayor Lori Lightfoot, Chicago’s first black Lady Mayor dropped the gun about the shaky financial forecast for Chicago in year 2020, at her “State of the City” address, last August 29, held at the Harold Washington Library. Without batting an eyebrow, Mayor Lori told Chicagoans about the $838 million budget shortfall for the coming 2020 fiscal year! The mayor, in her televised speech, proposed some solutions like having revenue-getting city programs, such as a casino, legalizing weed, which, like Vaping, generates more health problems. She said: ‘without help from the state, the city could look at other revenue-generating options, such as property tax hikes.” Ouch!!! More? Higher? Again??? High Property taxes have been a big pain in the butt among Chicago’s taxpayers. Tell me about it!

Excerpts from the Mayor’s speech: “If $838 million sounds big, it’s because it is”, Lightfoot admitted in her State of the City address. “It’s the largest in our recent history. As your Mayor, I cannot, in good faith promise you that I will take any option off the table to tackle this crisis, whether it’s through budget reductions or by raising revenue.”

Lightfoot called on Illinois legislators to make the city’s proposed casino financially feasible by addressing problems identified by a consultant with the tax structure. A recent outside feasibility study found that the tax structure in place for a Chicago casino is too onerous to attract investors. Her administration acknowledged, however, that such changes wouldn’t help with the city’s next budget.

Like Emanuel, who frequently criticized his predecessor former Mayor Richard M. Daley, Lightfoot without naming Emanuel for the city’s financial woes, faulted her predecessor Mayor Rahm Emanuel’s administration for leaving her team with “a staggeringly large budget deficit for next year.”

Lightfoot further took exception with the former mayor’s team for not providing a roadmap for solutions, saying, “We were not left with any credible plan on how to fix this massive problem.”’

MAYOR LORI LIGHTFOOT’s VISION FOR CHICAGO: “Our challenges are great, but our ability to solve them is even greater if we work together. It’s only by working together as a city and a state that we can become what we need to be.” True, Mayor. If, as the mayor you will count the VOICES of the “Ordinary People”!

The Mayor continued: “This is not a budget speech where I would lay out in detail every expense and every source of revenue. That will come in October. Tonight is an opportunity to explain where we are today with the budget gap for next year, the steps we have taken to date to close that gap, and to ask for your help. I promised you as Mayor that I would usher in a new era of good governance whose hallmarks would be integrity, transparency and robust civic engagement. That is what I have endeavored to do in every one of these last 100 days in office. “

“Why do I reference this important work in a speech about municipal finances?”, the mayor continued. “Because our growth strategy has to include continuing the reality of Chicago as a welcoming city. Contrary to the xenophobic rhetoric, immigrants contribute to our economy in a significant way. There is a reason why Little Village is home to the second most vital commercial corridor in our city. I stand with immigrants and refugees because it is the only moral choice.”

“In addition to being present in immigrant communities, I have spent time in neighborhoods that have historically not seen investment or even the presence of a mayor in years. I have listened to the stories of low-income and working-class families, like the one I grew up in, where mothers and fathers are struggling to put food on their table.”

ON City Pension: “Now is the time to build and grow better together for a brighter future. But as I made it clear many times, pension obligations are a challenge we must meet. Dedicated city workers have fulfilled their careers with the agree-ment that they will retire with the dignity and the certainty pensions afford. Our obligations are not optional. And I will take every action necessary to fulfill the promise we made.”

Thank you, Madam Mayor Lori. As a City of Chicago retiree myself, I presume you are aware about the “cuts” from our pension. Thank you for appreciating the hard work of the immigrants. We hope one day you can stop by at some of our community outreach programs so you can really see for yourself HOW IMMIGRANTS HELP BUILD AMERICA! ****

A heartfelt Tribute to the late Mr. Fernando Militar Guatelara, former Assistant to the Registrar at Silliman University, Dumaguete City, Philippines. The late Mr. Fernando “Nanding” Militar Guatelara, was born in Jaro, Iloilo, on November 2, 1918 to Maria Militar and Faustino Guatelara, Philippines. Last January 24, this year (2019), after he turned 100, two months and 23 days old, “Daddy” as he was fondly called by almost everyone who knows him, was told by his Lord and Savior Jesus Christ: “I will take you Home now. You have served my children and your beloved blood children. Time for you to join me in Paradise.”

Daddy Nanding died quietly in Chicago, Illinois under the loving care of one of his daughters, Antonette Guatelara Geary and her husband, Tim Geary, who took care of Daddy since 1988. Before I go on, let me chip in my personal recollection of Daddy Nanding when I was a student at Silliman. Daddy, was popularly called “Mr. Guats” (for Mr. Guatelara). As Assistant Registrar at Silliman University, no one can graduate without first passing through “Mr. Guats” academic FINAL EVALUATION; Several times in the past, some students who were ready to march to receive their respective diplomas were not allowed to march or graduate last minute when it was found out they lack one or a couple of units. A very emotionally devastating heartache for parents who flew from far places – some from foreign countries, parents of foreign students at Silliman University. Only to find out their children cannot graduate and more so, could not march on stage to receive their diploma!

UNIT EVALUATION is one of the pre-requisites among graduating students at Silliman University. If you missed not meeting with Mr. Guatelara months before your graduation, you cannot fault anyone but yourself. That’s how Important Daddy Nanding’s role was — at Silliman University. Now you’ll ask why he was a “Campus Figure”? Inside his office, students tiptoed. But outside, Mr. Nanding Guatelara was like a “Father” specially to foreign students who do not speak English very well.

“Our late Daddy Fernando Militar Guatelara, was born on November 2, 1918 to Maria and Faustino Guatelara in Jaro, Iloilo, Philippines. He graduated high school in Jaro, Iloilo, and finished his college at Silliman University, in Dumaguete City, with a degree in Business Administration. Later, he married Jesusa Ceriales and became parents to five daughters and two sons. He had other jobs, too, but the jobs he obviously loved were at Silliman University, especially as an assistant Registrar, later as a staff at the Main SU Library and, finally, as secretary to the College of Engineering.

Back to Tonette and Tim in Chicago. This is Tonette talking now:

“Daddy joined Tim and me in 1988, the start of his Chicago residency. Our Mommy Hone, Daddy’s wife for 57 years, went home to her Maker in 1999. My Mom came to join us in 1989, but after 1 1/2 years, she went back home to the Philippines. She couldn’t adjust to the changing seasons here. Daddy, on the other hand, sacrificed the absence of his wife and other family members, decided to stay in the US for two major reasons: Free medical care and a meager SS Income from the US government. He figured this financial aid could help his family in the Philippines. When he was well and much younger, he spent the winter months in Dumaguete City in the Philippines. His last visit was in 2001.

While living with us when he was younger, Daddy would start his morning quietly reading the Daily Bread, the Bible and praying. He watched sports like baseball and basketball. He read the newspaper every day. In the early years in Chicago, he kept himself busy with gardening.. Gardening became his hobby. He took care of the flower beds in the front and back of our home. He planted oriental, seasonal vegetables like petchay, ampalaya, kangkong, saluyot, alugbate, balatong and Ichiban eggplant. There were 40 big pots planted with eggplants. He sold his harvest to the nurses at Advocate Illinois Masonic Medical Center.’

“His bloomimg garden was his pride and joy. Daddy worked in his garden an average of 10 hours a day. We had the most beautiful garden in our block. Neighbors would come over to have their pictures taken when the flowers were in full bloom. “

Daddy was a true-blooded Sillimanian. When asked what’s his secret for long life is, he was quick to respond by raising his finger, pointing to the sky saying: “God’s love and grace.”

Simple living, praying and trusting God’s faithfulness are his daily principles in life. He had a very calm demeanor and took stress, quietly with a smile, knowing God is in control. He was a generous fellow, always sharing his time, talent and limited resources to anyone in need. Today, we celebrate with joy and thanksgiving to God, his 100 years on earth, the life of our patriarch… a quiet man, a man of few words, a man with very humble beginnings.

His legacy of love: trust and obedience to God, love and family unity, compassion for the weak, the hungry and the lonely are noteworthy. Mom and Daddy have five daughters and two sons; 14 grandchildren and 21 great grandchildren and still counting still. We are privileged to be part of Daddy Nanding;s life and the many lives he had touched… the man of the hour, our Daddy, Lolo, Grandpa, Tito, Tio Uncle and Manong. We love you very much! (By Ma. Antonia Guatelara Geary])

A beautiful memorial service was held at Faith Community Presbyterian Church, in Chicago, IL, where Daddy Nanding was a Member and Tonette is an Elder. Some of his children, grandchildren and Sillimanians attended. Tonette and Darlene will travel to the Philippines this November, to bring his ashes to his final resting place with his wife.@ Walk with God. Always. Amen. 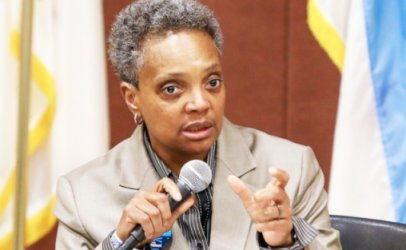 Mayor Lori Lightfoot showing strength to tackle the $838 million dollar shortfall of her Chicago coffer in 2020. 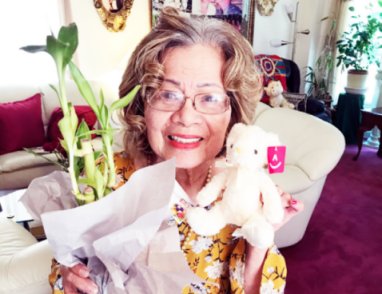 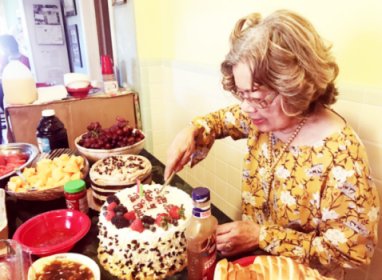 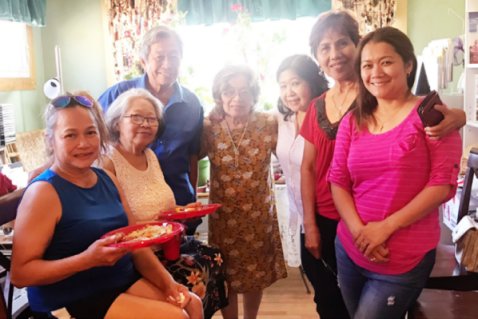 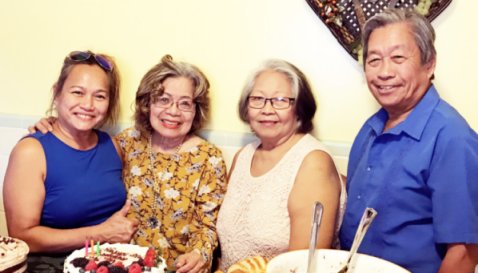 With my “Lovey Daughter in the heart” Evelyn Tolledo and long-time FRIENDS FOREVER, Me,the Ageless Birthday Celebrant, Laila and Rey Villar, who enjoy their Humanitarian Retirement in Capiz, Philippines, sharing what “small grace” they have with the barrio folks around. If you have small “extra grace” please share it with the Villars.

My Happiest Birthday FAMILY CELEBRATION last August 24th with the FAMILIES I do not have in Chicago… my “Family-in-the-Lord”– JHUN and CHAZ PATRON FAMILY, made happier by the presence of their lovely daughters, from left: Crisza, Clarizze, Cece, Daddy Jhun, Chazzy, ME Mommy Elsie, the celebrant, Chazzy, Baby and Mario Sales. 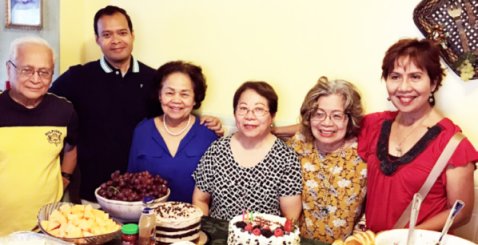 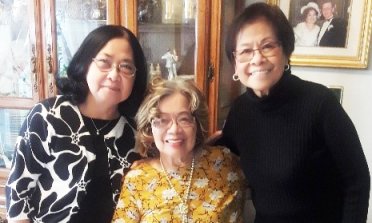