Chicago, 11 September – Led by Consul General Gina A. Jamoralin, the Philippine Consulate General in Chicago joined in the commemoration of the 77th Annual Memorial Service for Maywood Bataan Day at the Maywood Park Veterans Memorial on 8 September 2019.

Organized by the Maywood Bataan Day Organization (MBDO) and the Village of Maywood, the memorial service remembered the heroic service and sacrifice of American and Filipino soldiers during World War II, particularly in defending Bataan and the subsequent Death March and incarceration of prisoners of war.

Maywood was the location of the Illinois National Guard Armory where the 33rd Tank Company, 33rd Infantry Division was based. The 33rd Tank Company was inducted into active Federal service as Company “B” of the 192nd Tank Battalion on 25 November 1940. Eighty-nine (89) members of the 33rd Tank Company forming part of the battalion arrived in Manila on 20 November 1941, and proceeded to Clark Field. When Japan invaded Luzon, the battalion provided cover for the mass withdrawal into Bataan of 80,000 Filipino and American troops ordered by General Douglas MacArthur. The 192nd Tank Battalion soldiers were the last defenders into Bataan.

Upon the surrender of Bataan on 9 April 1942, 70,000 Filipino and American soldiers became Japanese captives and became victims of the Bataan Death March from Saysain Point, Bagac and Mariveles, Bataan to Camp O’Donnell, Capas, Tarlac, via the train station in San Fernando, Pampanga, where the prisoners were loaded onto trains. Of the 89 members of the 33rd Tank Company that arrived in Manila, only 43 survived the death march and subsequent imprisonment and returned to the United States.

Consul General Gina A. Jamoralin , in her remarks, noted that this year marks the 75th anniversary of the General MacArthur’s Leyte landing on 20 October 1944 to begin the campaign to recapture the Philippines from Japanese occupation. She added that without the sacrifices and valor of Filipino and American soldiers in defending Bataan, it would not have been possible for General MacArthur to fulfill his “I shall return” promise and liberate the Philippines.

In her opening remarks, Maywood Mayor Edwenna Perkins urged the participants to honor the heroes by to guarding and building upon the freedom and equality gained for all races in the past century.

In his keynote address, State Command Sgt. Major Sean P. Carney of the Illinois Army National Guard remembered the heroism of war heroes, recalling the hardship and suffering encountered by the last defenders of Bataan.

Honored during the ceremony was Staff Sergeant (SSG) Daniel Stoudt of Company A, 192nd Tank Battalion of the United States Army. His next of kin received his numerous awards from the U.S. Government, including the Purple Heart. Consul General Jamoralin also proudly awarded his next of kin the Presidential Unit Citation Badge, Philippine Defense Medal, and World War II Victory Medal conferred by the Philippine Veterans Affairs Office of the Department of National Defense. 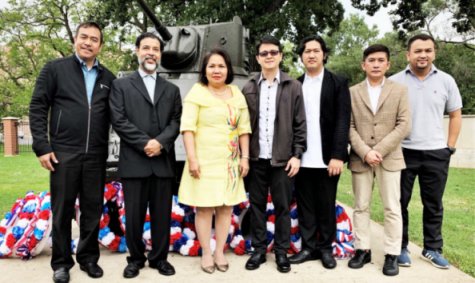