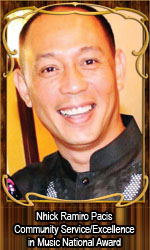 He holds a Bachelor of Music degree, majoring in Piano from the University of the Philippines College of Music. He was also a member of the UP Concert Chorus from 1989-1999 and has joined its 1988,1990,1976 and 1997 International Tours in Europe, USA and Canada

He grew up and worked in the Philippines but moved to Tampa in 2001 and is now working at the Philippine Cultural Foundation (PCFI) as in-house Music Director, web designer and graphic artist.

He also has a post at the Our Lady of Perpetual Help Church in nearby Ybor City, Florida as a resident organist and choir director.

Though pianist by initial profession, he has had much success as a composer/ arranger. Creating music has been his second nature since he was at a young age. His mother attests that while the neighboring kids were playing house, he would be playing musicals. Noting his potentials, an aunt helped his parents send him to professional piano teacher in nearby Laoag City.

Though not as popular as other big -time composers, he gets his own share of the pie. He has arranged and composed musicals and soundtracks for films, has arranged and composed for solo instruments, choir and ethnic ensembles, and even orchestra. He has made music for different publics – ranging from community groups, to grade school kids, to nuns and priests, to showbiz personalities, amateur and professional choirs, pop and classical artists and many more.

Likewise, he has developed the passion for web and graphic designs and video editing, in addition to music software. Learning through experience and with the help of books and through external resources, he radiated to the world of Photoshop and publishing.  As a matter of fact, this is now part of his workload in his present Music Director job: maintaining the company’s webs and creating all sorts of publishing materials   related to their work – from post cards to banners to whatever.

Just like any struggling artist in America, he goes for every gig that he can squeeze into his schedule. Apart from his day job, he teaches, has choir rehearsals some nights of the week, plays the organ and conducts the choir on weekends. He plays for weddings, accompanies other artists and performs in shows now and then.

One thing constant, though, is that when he comes home at the end of the day, he does more musical experiments at his computer after walking the dogs, mowing the lawn or tending his garden. Sometimes he paints. Or edits more photos and videos. Or just edits his own site. Anything creative that he can lay his hands on. Creativity to him is an itch that doesn’t go away.

Nicknick, as he is also fondly called, comes from the Pacis family of Vintar. He had his early schooling at the Vintar Central School. When he was in Grade V, he represented Region I in the NAMCYA Piano Competition at the Cultural Center of the Philippines. When he was in Grade III, his artwork was chosen as an entry to an Art Competition in India. He attended High School at the Mariano Marcos Laboratory School in Laoag City.