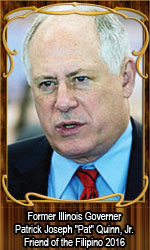 Democratic Party, his political career started as an activist and founder of the Coalition for Political Honesty. In the 2002 gubernatorial election, Quinn won as Lieutenant Governor of Illinois. He assumed the governorship on January 29, 2009, after Governor Blagojevich was impeached and removed from office on corruption charges. Quinn was elected to a full term in office in the Illinois 2010 gubernatorial election, but lost the Governor’s seat at the Illinois 2014 gubernatorial election to the current Gov. Bruce Rauner. But former Gov. Quinn did not just “sit there” after losing his chair in Springfield. He did volunteer work for the masses. Currently, he is busy working on an advocacy project called “Take Charge Chicago”, a petition for referendums to limit the Mayor of Chicago to two four-year terms and to create an Elected Consumer Advocate in the city, and “not another appointee by the mayor,” he added during his

speech at the City Club of Chicago, lately.