Dr. Nunilo Ignacio Rubio, Jr. (or Jun Jun as he was affectionately called) was born to Drs. Nunilo and Elenita Rubio 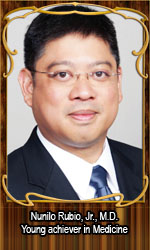 in 1971 at the start of their new life together in the United States doing their residency at Hines VA hospital in Chicago (Model Family awardees 2011 & Excellence in Medicine, Dr. Nunilo Rubio, 2004, Chicago Filipino Asian American Hall of Fame).  The oldest of three brothers, he was the most inquisitive one, constantly taking things apart to see how they worked and exploring the world around him.  This inquisitiveness made him excel in his early years of schooling, and for some bizarre coincidence, loved to learn in 3’s.  In the arts, he not only took piano, but also violin and trumpet.  In sports, he excelled in Tae Kwon Do, Soccer, and Gymnastics.  And, in college, he completed a Bachelor of Arts degree not only in Biology, but French and Psychology, as well.  Armed with this strong foundation, he entered into Medical School at The University of Illinois at Chicago in 1994 and earned his Doctorate in Medicine in 1998.  From there, he was torn as to what to do – both of his parents were Internal Medicine physicians and his father was a well-respected Adult Endocrinologist in Chicago and the Filipino American community.  But ‘Jun Jun’ also loved Pediatrics and had a special knack for communicating and relating with children.

In the end, being the overachiever, he entered into a combined Internal Medicine and Pediatrics Residency at The University of Texas at Houston in 1998 and completed his residency in both Internal Medicine and Pediatrics.  But he did not stop there.   He loved watching his father practice the complicated art of Endocrinology, the study of hormones, and knew he was destined for that specialty which would constantly challenge him and feed his inquisitive nature.  Because of this, Dr. Rubio continued his studies at The University of Texas at Houston and entered into the combined Adult and Pediatric Endocrine Fellowship in 2002, which he completed in 2006 and eventually became Board Certified in Internal Medicine, Pediatrics, and Adult Endocrinology.  During his time in residency and fellowship, he loved to teach and had a knack for instructing the medical students, residents, and fellow attending colleagues, having already given two lectures to the Philippines’ beloved Far East University Medical School Alumni Foundation as a resident and fellow.  He decided to stay on as an Assistant Professor in Pediatric Endocrinology at The University of Texas and has been there ever since.  During his first ten years as Assistant Professor, he had earned several accolades, including Best Teaching Physician in Pediatrics or Subspecialty six times by the outgoing Pediatric Residency class, Dean’s Teaching Excellence award in 2010, listed as one of the best Pediatric Endocrinologists in Houston by Houstonia Magazine three times, and received along with his brothers, the Gintong Pamana Young Achiever’s Pag-Asa-Award in 2011 in Chicago.  He also has been an active board member of the Juvenile Diabetes Research Foundation since 2009 and not only has he given a multitude of lectures to the Pediatric Residency and Family Practice physicians but also has been interviewed by MSN, Fox 26 News, Houstonia Magazine, and the Houston Chronicle newspaper several times for his expertise in Pediatric Endocrinology.  But his greatest achievement was meeting and falling in love with his wife, Cheryl, who he had married in 2007 and since then had been blessed with two children – Nunilo Ethan Canare Rubio, III (4 years old) and Peter Xavier Canare Rubio (1 ½ years old).