VERNIE VELARDE-MORALES WOMAN OF THE YEAR 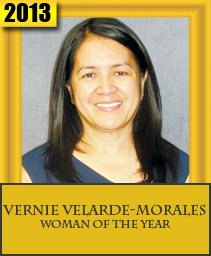 Vernie Velarde-Morales is the Philippine Department of Tourism’s Director for the Central Region of North America (USA and Canada). Her office’s area of coverage encompasses 19 states of the U.S.A. and 2 provinces of Canada. Vernie is a Philippine Career Executive Service (CES) Director. Prior to her posting in Chicago, she served as the Department of Tourism’s (DOT) Director for Administrative Services, responsible for Personnel Management, Human Resources Development, General Services Administration, and Information Technology. She also chaired and co-chaired several department and inter-agency committees, including one on her advocacy on Gender and Development. Before DOT, Vernie worked in its government corporate marketing arm, the Philippine Convention and Visitors Corporation, in the banking and finance industry, and the academe. Currently, Vernie is involved with such travel-related associations as the: Midwest Chapters of the Pacific Asia Travel Association (PATA) and the American Society of Travel Agents (ASTA), Chicago Professionals in Travel (CPIT), South Suburban Travel Professionals (SSTP), and the Midwest Travel Suppliers Association (MTSA). She is also affiliated with the Meeting Professionals International (MPI) and the American Society for Training & Development (ASTD). Vernie’s unwavering advocacy for Philippine Tourism provided a strong foothold for her successful implementation in Central US and Canada of such PDOT breakthrough projects as the: “Rediscovery Philippines”, “Meetings Make Manila”, “Tourism Volunteer 12” (V-12), “WOW Philippines”, “The Philippines: Explore. Experience. Return.” (PEER) campaign, and the “Philippines Specialist” program.

She is also the lead coordinator for the “Adventure” and the “Meetings, Incentives, Conventions, and Exhibitions” (M.I.C.E.) niche markets’ programs for North America. Among the testaments to Vernie’s commitment and efforts in promoting pride of country, heritage, and culture are: her cooperation with the John G. Shedd Aquarium officials on the “Wild Reef”, a permanent exhibit that replicates the vibrant reef system of the Philippines’ Apo Island in Negros Oriental; her partnership with the Philippine Reef Gala Committee initiative in supporting Shedd’s “Wild Reef” and the Philippines’ positioning itself as a top diving destination; making the Midwest Region a forerunner in DOT’s Tourism V-12 Program (which mobilized overseas Filipinos in promoting travel to the Philippines), notwithstanding the higher density of Filipino Americans in the western and eastern regions of North America; the loyal and growing supporters and participants to the Ambassadors Tour and other Philippine tour programs; the positive and increasing media support of Philippine Tourism in PDOT Chicago’s area of coverage; and the acknowledged quick and effective servicing by her office of its constituents’ inquiries and requests. On top of these, the Philippines has figured prominently in travel trade shows of major associations, and in such popular Midwest Region consumer shows as: the NBC 5 Travel Expo, the Our World – Underwater Show, and the Adventures in Travel Expo (now named Chicago Tribune – Travel and Adventure Show). Vernie finished her M.S. in Social-Industrial Psychology academic studies from De La Salle University in Manila, and her Liberal Arts degree, double major in Psychology and English, from the College of the Holy Spirit with a GPA of 1.43. She was an active student leader who held top posts in several school organizations from high school through college, where she was editor-in-chief of the College of the Holy Spirit’s literary magazine. Professionally, Vernie has undertaken several technical, executive development and management programs in the Philippines, Canada, Australia, and the United States. She is a two-time study grantee of the government of Australia. Vernie and her husband Bob are members of Couples for Christ (CFC) and American Mensa (Chicago Area Chapter). They have been parent members of the Illinois Association for Gifted Children (IAGC). Vernie and Bob have 2 daughters, Monica Mae (16) and Michaela Joy (11). Vernie was nominated by Ms. Lourdes Livas.