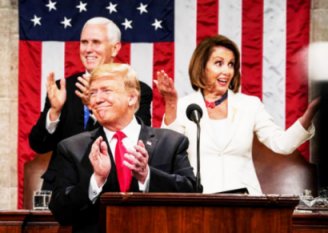 Anyone, even a Democrat reluctant to say so, can see that the economic State of the Union is pretty good. Unemployment is down among key sectors, including among blacks. The number is so low as it has been since the racial number was broken out in 1972. Businesses have committed to expansion, paying bonuses and raising wages– the Trump tax cuts. There are still promises to keep before the president and Congress to sleep on tonight.

Part of the speech that touched me, “Millions of our fellow citizens are watching us, gathered in the great chamber, hoping we will govern not as two parties, but as one nation.”

This type of unifying rhetoric, directed from Trump to te country as a whole, rather than to his opponents or his supporters, has been rare over the past two years.

He calls for reconciliation — which did not address his role in inflaming partisan divisions–were met with mostly stone-faced silence from Democrats, who bitterly oppose most of his agenda and whose memories are still fresh with the 35-day government shutdown.

It was his first time addressing the Democratic majority house and his political nemesis, House Speaker Nancy Pelosi, sitting behind his shoulders offering only only sparing applause. She should at least repect and applaud the office of the President, if not the President himself.

“We must reject the politics of revenge, resistance and retribution,” Trump told Congress, claiming he was “putting forward the agenda of the American people.”

He promised during the campaign to fix the broken immigration bill and securing the American borders to build a wall. The Democrats are refusing to finance the border security wall even though they approved the funding during the Obama administration and, most importantly, as lawmakers of the land are bound by the Constitution to pass the law.