LOOK: Angel Locsin hangs from underneath a truck for stunt

MANILA — She’s likely the first actress that comes to the mind whenever a role for an action movie or show is up for grabs.

Living up to this reputation, Angel Locsin appeared to have refused a stunt double for a scene in “The General’s Daughter,” where she had to hang under a moving truck.

On Instagram this Thursday, she posted some behindthe- scenes photos of her smiling and waving back while underneath a small truck, playfully quipping: “Walang masakyan? You SABIT.”

The scene aired in Wednesday’s episode, which saw her character, Rhian, sneak into a military compound as part of a secret mission given to her by her adoptive father.

Her photos sparked words of praise from her fans, but also worry from some, given her past back issues that forced her to back out of the lead role in the planned “Darna” adaptation.

Angel Locsin did not have a stunt double when she hung underneath a truck for The General’s Daughter. 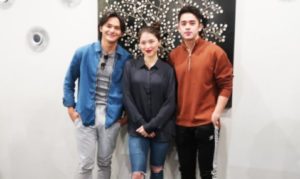 TODA One I Love: Laughter and kilig with realities on Philippine politics