The pioneering efforts of the Filipino American National Historical Society in 2009 has paved the way of celebrating October as Filipino American History Month (FAHM). October is the designated month to observe the significance of the arrival of the first Filipinos in Morro Bay, California on October 18, 1587. This year’s theme is centered on “Celebrating the History of Filipino American Activism.”

With the pandemic and this year’s national elections, community leaders have expressed their thoughts on the strengths, resilience and activism of Filipino Americans.

Rozita Lee, who is Naffaa National and Nevada Advisor says “Celebrating Filipino American History Month is an exciting time for Filipinos across the nation. This year, however, the Pandemic is creating challenges for organizations to celebrate together in large numbers because of restrictions placed on the population for health safety measures. In Nevada, no more than 50 people can congregate at a time and only with social distancing and wearing of face masks. This is not stopping us from continuing to be fully engaged in the political process of elections because we comply with the regulations. We still do voter registration, education, and mobilization. We are helping candidates with their campaigns. We continue to hold Virtual Townhalls via Zoom and are conducting weekly phonebanking to survey Filipino families about theirs plans to vote. We have received a lot of recognition and encouragement from congressional and local government leaders on our initiatives. Recently, we have a call from Congresswoman Judy Chu, chair of the Congressional Asian Pacific American Caucus in Washington, D.C.”

On the impact of our communities in mainstream America, Mayor Ron Falconi of Brunswick, Ohio believes that “The Fil-Am Community has had a tremendous impact on American life over the decades. Fifty or sixty years ago, many first came to America as medical professionals (such as doctors or nurses), engineers, or teachers. As the years have progressed, Americans of Filipino descent have truly been a part of the great American melting pot, making an impact throughout American life, including medicine, engineering, education, sports, law, entertainment, and even politics! Going forward, as the Filipino American community continues to grow, our impact and influence grow with it. That is why it is always important to be involved in our communities. As we are a part of these communities, we bring to the table the Filipino values of God, family, hard work, and self-reliance, and we expand upon all of them as we continue to live and be a part of the American dream!”

The havoc that COVID 19 brought to America had deepened the appreciation of Filipino Americans who are serving in the frontlines.

Honorary Consul of the Philippine Honorary Consulate Colorado Donna LaVigne says “The pandemic has emphasized the essential role of Filipino and Filipino-American medical professionals in the US Healthcare system. There are more than 150,000 Filipino nurses in the US with hundreds of thousands more 1st generation FilAm nurses who are critical to the successful operation of so many medical facilities in the US. These front line providers and dedicated professionals delivered care to the most sick whether in an ICU, an emergency department or community testing center all while exposing themselves to the virus, accepting the risk so that others could be treated and recover. It is possible, even likely, that the system would have collapsed under the patient load without our kababayan’s selfless dedication. I am so very proud of the Filipino American contribution to the fight against COVID 19 and hope that the extraordinary efforts of these immigrants and their families in battling the pandemic is considered when immigration and other policies are discussed by the policy makers.”

Indeed, this year’s health crisis had given everyone an opportunity to reflect and learn some of life’s most valuable lessons.

Founder and Publisher of America’s award-winning newsmagazine, Via Times, Veronica Leighton says “I have read before and now I believe, through my current COVID experience, three important things in order for any person to survive any crisis: (1) Don’t panic, be cool, be resilient, which is a great Filipino natural trait; (2) Empathize with other people, related or not-always offer a helping hand, and (3) Bone-up or update yourself with the latest developments and share with as many people as you can reach. As a people person, I have noticed that this pandemic has strengthened the Filipino resolve to help others particularly in matters of health, life and death. I remembered all the unique experiences involving Filipino frontliners and essential workers – I surely can write a book on this topic. Filipino American groups have shown various reactions to US politics. I have never seen or experienced meeting so many Filipino political groups that are passionately rallying for a favorite party candidate. This year is so overwhelming, but in times of sickness and pain, we can all be united and strong, physically and morally!”

To commemorate the 2020 FAHM, the FilAm community in Michigan through the leadership of US Pinoys for Good Governance (USP4GG) is launching a virtual celebration.

Diversity Champion and Founder of USP4GG in Michigan, Willie Dechavez says, “We worked hard to produce this video to honor the many FilAm activists in the community. Many Filipinos in Michigan are serving in the frontline to combat COVID 19. Hundreds, if not, thousands of them are healthcare workers such as nurses, doctors, therapists, hospital and nursing home administrative staff and nursing aides. They are exposed daily to the risk of contracting the virus. With the presidential elections just around the corner, Filipinos in Michigan are also spearheading efforts to enlighten the electorate on the important issues at hand. A lot of these discussions are communicated through social media as well as in the Filipino Star News. The main goal is to encourage Filipino American voters to make a wise decision when they go to the polls this November.”

Michigan’s virtual celebration guest speaker is no less than the highly acclaimed, Loida Nicolas Lewis. In her speech, Loida, who is the USP4GG National Chairman, inspired every Filipino Americans to have be active in their roles in their communities. She says “I encourage everyone to register to vote in this year’s presidential elections and vote early. It will determine the kind of America we want, united in our goals of liberty and justice for all or divided into factions. You should participate in any efforts that promote diversity and inclusion in various ethnic groups. Let us always promote good governance, not only here in the US but also back home in the motherland.” FAHM 2020 is truly a celebration of heightened spirit in community involvement for every Filipino American!

Ryan Tejero is a writer, columnist, publicist and editor in the Filipino American community. He is a columnist- writer of Chicago’s award-winning newsmagazine, The Via Times. He is also a columnist-writer of the only FIlAm newsmagazine in Texas, One Philippines Texas. He is the Associate Editor of the Business Chronicles newsletter of the Philippine American Chamber of Commerce Texas. From 2012-2016, he became the publisher and editor of the newsletter of the National Federation of Filipino American Associations, which is based in Washington D.C. In 2016, Ryan co-founded and became the editor of the first “Pinoy sa Romania,” newsletter. From 2014-2015, Ryan was running a column featuring Filipinos around the world in Planet Philippines/PASA Pinoy newsmagazine based in Melbourne, Australia. 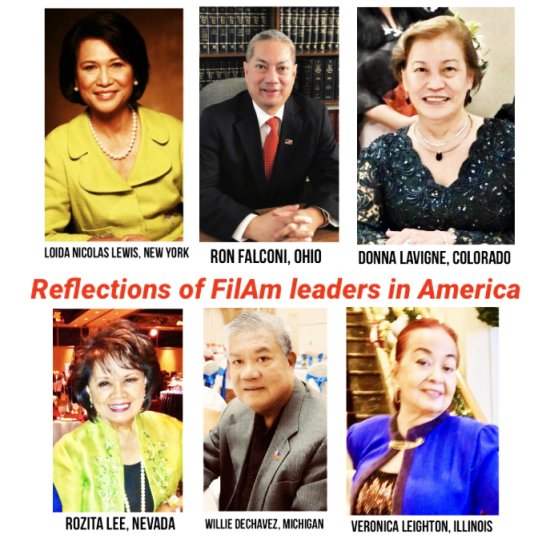