POLO, through Labor Attaché Angela Librado-Trinidad and Welfare Officer Josephine Tobia, emphasized that while the Philippines has undertaken critical policy and legislative reforms for the protection of the rights and welfare of women, the participation of women in issues that affect or benefit them remains a crucial element not only in protecting the gains they achieved over the years, but also in ensuring that their interests are consistently reflected in all plans, programs and activities of governments and communities.

Three Filipina workers who were victims of various forms of abuse and exploitation were invited to share their personal stories of suffering and survival before an audience composed primarily of Filipino women coming from various sectors and fields of interests.

The three Filipinas who spoke at the event were Corazon Ruiz, a Ph.D. degree holder from the Philippines who was a victim of labor fraud; Beth Gatmaitan, a K-visa holder who became a battered wife and whose daughter was also threatened with abuse; and Armiya Lagasan, a domestic worker abused by her employer.

They shared compelling narratives of dreams shattered by the realities of discrimination and abuse, and how they survived and rebuilt their lives through the help of Philippine and US government agencies, as well as of well-meaning civil society advocates and private citizens.

The sharing of personal stories was followed by presentations by Timothy A. Riera, National Outreach Coordinator, US Equal Employment Opportunities Commission (EEOC); Katherine Soltis, Immigration Staff Attorney, Ayuda; and Police Brigadier General Sotero Ramos, Jr., Philippine Police Attaché to the United States. The presentations focused on how women can seek assistance in cases where there is gender-related abuse in the workplace, and even at home.

Mr. Riera spoke about existing gender-related laws and policies in the United States, and how these are being implemented by the Department of Labor and the EEOC. Ms. Soltis described how Ayuda, which has worked on a number of cases involving Filipino women, serves and advocates for low-income immigrants through direct legal, social and language services, training, and outreach in the Washington DC metropolitan region. And General Ramos outlined the current Philippine situation and the reforms undertaken by the Philippines to address discrimination and violence against women and children.

“The Embassy firmly believes that whether in politics, the economy or in our communities, women should be able to participate actively on terms equal to those of the men. I commend the Philippine Overseas Labor Office for organizing this relevant and timely discussion,” Philippine Ambassador to the United States Jose Manuel G. Romualdez said in a statement after the event.

“The Embassy also expresses its admiration and appreciation for the three Filipino women who shared their stories with the community. We find strength, commitment and inspiration to continue to fight for the well-being and protection of Filipinos overseas from their individual stories of personal courage and struggle in order to build better lives for themselves and their families,” Ambassador Romualdez added.

In 2017, the theme “We Make Change Work for Women” was adopted for the period 2017- 2022. It highlights the empowerment of women as active contributors to and claim holders of development. ### 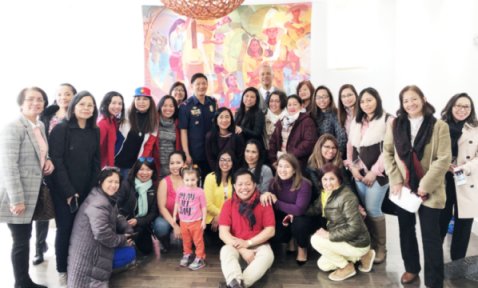 Group photo of the participants, speakers, and representatives from the Philippine Overseas Labor Office (POLO) at the conclusion of the panel discussion “POLO Meets the Filipinas” held at the Philippine Embassy Chancery Annex on 23 March 2019.