Community News
Home / Sections / About Our Cover / Victoria Smith, An Emerging American Author is Also Filipino–and VIA Times’ Own!

Victoria Smith, An Emerging American Author is Also Filipino–and VIA Times’ Own! 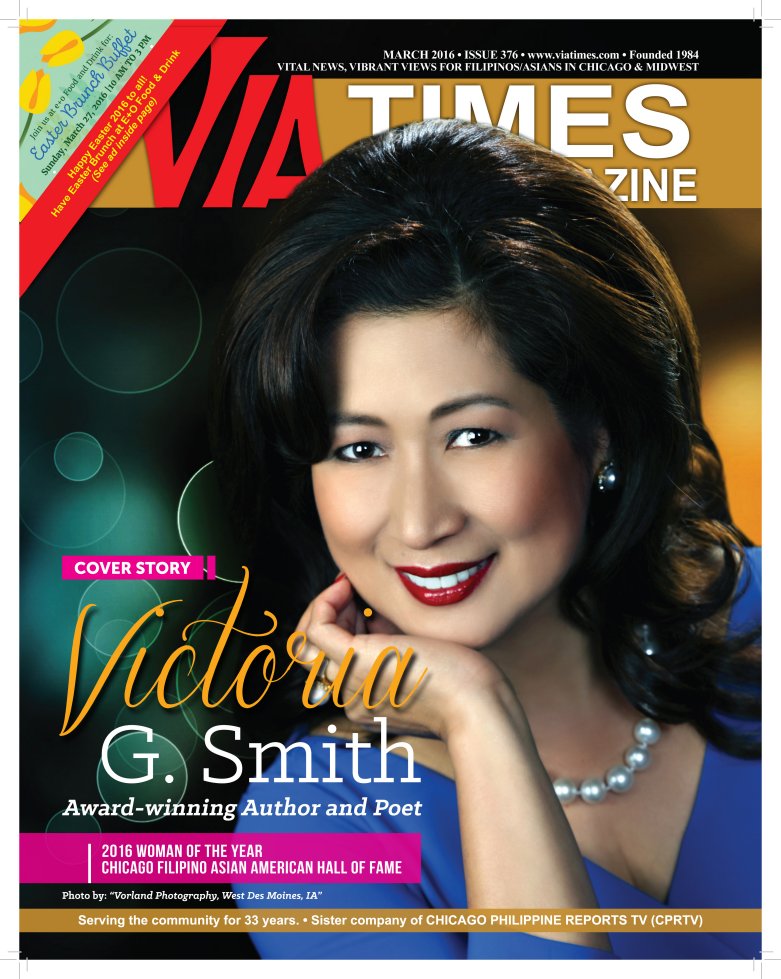 When VIA Times’ editors Veronica Leighton and Joe Mauricio went to Des Moines, Iowa in the spring of 2011to cover that year’s CelebrAsian Festival of which the Filipino American community was an active participant, they hardly expected they’d discover an exciting new writing talent. And when they were invited to a reception in the beautiful home of a “Mr. and Mrs. Smith,” they were surprised to find the residence filled with proud displays of the wife’s Philippine heritage, evident in the various art works and paintings. Thus, they weren’t surprised by what followed: the delicious food and unique brand of warm and generous hospitality Filipinos are known for worldwide. But when they were finally introduced to their lovely hostess, they were floored to realize they were also meeting a lady who can truly be described as a present-day Renaissance woman.
Maria Victoria Arcilla Grageda-Smith, fondly called “Vicki” by her U.S. friends and “Marivic” by Filipinos who’d known her since Philippine days, happened to not only have been a practicing lawyer in the Philippines (she was at one time the only female lawyer in the legal department of San Miguel Corporation, and an associate attorney in the distinguished Manila law firm Sycip, Salazar, Hernandez & Gatmaitan), a former commercial model, and a magna cum laude graduate and scholar of the premier Philippine state university, the University of the Philippines (and thus, a fellow alumna of Veronica’s), but also a highly creative and artistic person, apparent from how she had personally designed, renovated, and decorated their French-style home that was already a landmark in the historic Des Moines neighborhood of Linden Heights before she and her husband became its proud owners two years earlier. What Veronica and Joe were yet to find out was that Vicki was also an award-winning fiction writer and published poet.

When they learned this during the same party, they asked Vicki to read some of her work. True to what they now know is characteristic of their engaging hostess, Vicki charmingly obliged and read a couple of her poems published in one of the Midwest’s foremost literary journals, Lyrical Iowa. Veronica was particularly moved by one of Vicki’s poems, Second Time Around, that exalts the quotidian aspect of love found later in life as a rare and precious blessing. She immediately offered Vicki the opportunity to write a poetry column for VIA Times that Vicki happily accepted. As they say, the rest is history—which is now developing perhaps as just the beginning of what could be the glorious literary career of an emerging American writer who, we in VIA Times are proud to say, is not only Filipino but also one of our very own columnists. We are also happy to announce that Vicki is this year’s Chicago Filipino Asian American Hall of Fame (HOF) Woman of the Year.

Vicki’s writing career steadily gained momentum since the publication of her critically acclaimed first poetry book, Warrior Heart, Pilgrim Soul: An Immigrant’s Journey, that was launched in none other than the 2013 HOF, which honored Vicki with the Outstanding Community Volunteer and Writer Award. On April 1 this year, Vicki will be featured by Brain Mill Press in a reading and signing of her award-winning debut novella, Faith Healer, during what could be the biggest, if not the most important annual writers conference in the world—the AWP (Association of Writers and Writing Programs), that will be held at the Los Angeles Convention Center. The next day, April 2, Vicki will also be honored at an author event at the Beverly Hills Public Library by her University of the Philippines batchmates and Holy Family Academy (Angeles City) High School classmates, co-sponsored likewise by her publisher, Brain Mill Press. The event will additionally feature a reading by her friend and Hudson Prize-winning poet, Abayomi Animashaun.

We asked Vicki how she got started on a literary career in the United States after her otherwise promising legal career in the Philippines. She said that after marriage to her equally charming and handsome Americano husband, Steve Smith, that led her to immigrate to the United States, she anticipated continuing her legal career, so she attended the University of Michigan School of Law where she earned her master’s degree in law. But their family’s frequent moves across North America (often, every couple of years) due to Steve’s career (as an international consultant) prevented her from establishing a legal career, let alone any kind of career that required her to stay put. She also found raising her then young children, Francesca and Travis, minus the assistance and support of her family and the privilege of domestic help she used to enjoy in the Philippines, to be challenging. For the first six years of their marriage, Steve travelled two out of seven days of the week. In this context, she thought their children would benefit from a full-time parent; thus, she decided she was the best candidate to be the at-home parent. It proved likewise the best way she could care for her children while she acclimated to what was still then an alien country to her. “On the one hand, I ached from not practicing the profession I had trained so hard for in the Philippines,” she said. “On the other hand,” she continued, “I realized I’d been blessed with a rare opportunity to do something I’d always wanted to do but had always been too busy to do in the Philippines: indulge my childhood love for creative writing.”

Vicki’s early efforts won her early rewards. Her short story, Portrait of the Other Lady, won first place in the 2004 Ventura County Writers Club-Ventura Country Star national short story writing contest—the first time she’d entered a writing competition. Her recent distinctions include winning the 2015 Driftless Unsolicited Novella award for her novella, Faith Healer, and semi-finalist in the 2015 Elixir Press Fiction Award for her story collection, Faith Healer and Other Stories. Today, her poetry and other literary work are published by a burgeoning list of literary publishers that include, among others, Reed Magazine, The Greenwich Village Literary Review, The Earthbound Review, Elite Critiques Magazine, Ruminate Magazine, Westward Quarterly, The Earthen Lamp Journal, The Milo Review, Lyrical Iowa, and Dicta. Her essay, Gatekeepers and Gatecrashers in Contemporary American Poetry: Reflections of a Filipino Immigrant Poet in the United States, appears in Black Lawrence Press’ 2015 anthology, Others Will Enter the Gates: Immigrant Poets on Poetry, Influences, and Writing in America. In June of last year, Black Lawrence Press featured her in a book launch and reading of the anthology in New York City. Vicki attended the 2005 UCLA Asian American-N.V.M. Gonzales Writers Program and has been featured as an emerging writer in several print and online articles. She is currently writing her first novel, Gabriela’s Eyes, and a second poetry collection, Mother of Exiles.

Vicki proudly shares that most of her literary works are inspired by both Philippine and American culture, history, and experiences. Her winning novella, Faith Healer, for instance, while fiction, is set against the backdrop of historical events in the Philippines and the United States, particularly during the 1986 Philippine People’s Power Revolution. Her first poetry collection, Warrior heart, Pilgrim Soul: An Immigrant’s Journey, consists of poems written during, and inspired by her first twenty years as an immigrant in the United States. Her novel-in-progress, Gabriela’s Eyes, is partly set in World War II Philippines and contemporary America, and tells a poignant albeit fictional story of Filipino comfort women from her home province of Pampanga, likewise inspired by true events. Her second poetry collection manuscript, Mother of Exiles, is inspired by the Philippine diaspora in the continuing saga of Filipino immigrants and overseas workers, and features new poems that have already been praised and published by various editors and literary journals.

Asked how she wishes to be known as a writer, Vicki replied, “I hope to be known not only as a good American writer, but also as a great Filipino writer—to leave a lasting literary legacy that reflects what is good, and true, and beautiful about my native country and people, and more importantly, to be claimed by them as their own people’s poet and writer like my first literary idol, Jose Rizal.”

Updates on Vicki’s literary work and author events may be found in her website, VictoriaGSmith.com. 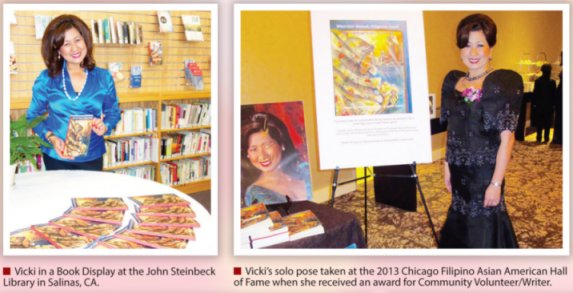 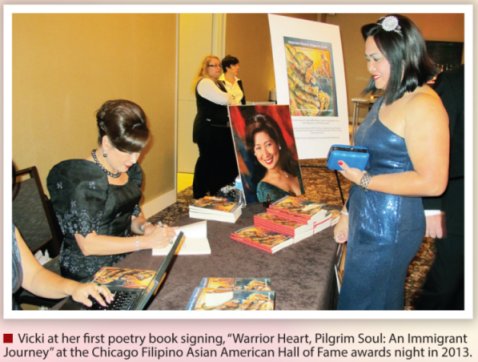 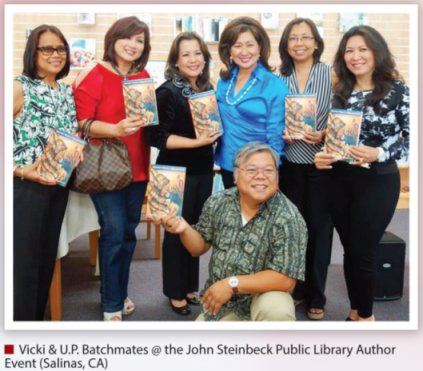 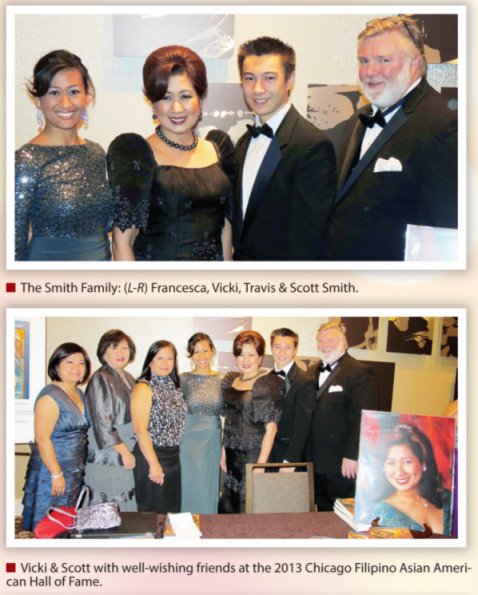 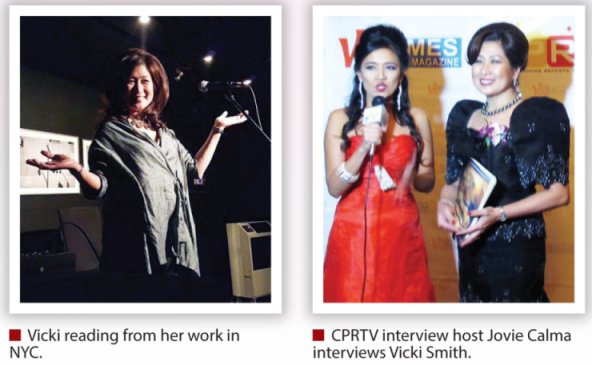 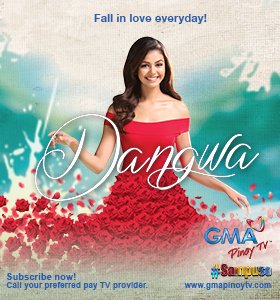 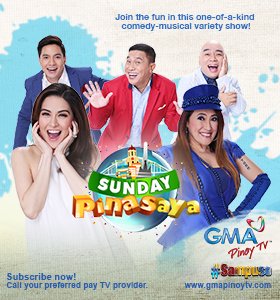 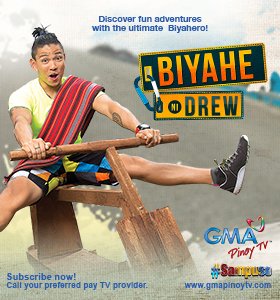