Meanwhile “Marawi Liberation: War is Over” by GMA News TV’s flagship newscast State of the Nation with Jessica Soho (SONA), was short-listed in the Daily Journalism category.

Aired on GMA 7 last year, Philippine Seas aimed to uncover the wonders and threats surrounding the Philippines’ marine gems. Araullo and the rest of the team went on a rigorous 10-day expedition across Luzon, Visayas and Mindanao. Each journey presented the beauty of the country’s abundant seas and oceans while touching on the threats and problems the Philippines and Filipinos who rely on the seas for a living face. In fact, after the airing of the special, eight Filipino fishermen detained in Indonesia were repatriated to the Philippines. The court found insufficient grounds to charge them for illegal fishing.

GMA News TV’s Reel Time, on the other hand, featured the story of 12-year-old Dagul and his fellow volunteer ‘little teachers’ in “Batang Maestro” episode. Driven by a determination to build a community with zero non-readers, the head teacher of San Jose Elementary School in the province of Sorsogon started a program to teach children in remote villages how to read. He is helped by his students who share his advocacy, one of them is Dagul. Together with his fellow little teachers, Dagul braves the long river of Donsol on board a bamboo raft that they sometimes have to push against the current, and takes an hour walk up to a village on a mountain. Their goal is to reach children who have difficulty reading because they live so far from school that they’re often absent from classes.

Now on its 14th year, the AIBs are the international awards for factual video, audio, and interactive productions. (30) 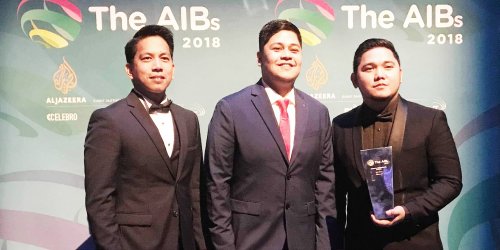