Ambassador Romualdez Greets The Midwest In A Townhall Meet

Chicago, 14 November 2019 – H.E. Jose Manuel G. Romualdez, Philippine Ambassador to the United States, met members of the media, local officials, and Filipino communities from the Midwest in a “Town Hall” Meeting at Tita Mia’s Filipino Restaurant and Café at Niles, Illinois, on 9 November 2019.

The Meeting began with a detailed update from SBMA Administrator Wilma Eisma, about the commercial potential and vibrancy of Subic Bay as a business location. The SBMA Administrator narrated the story of SBMA—from the time the US Navy left in 1992—to its present state as a known hub for trade and investments in the region.

Taking off from Subic Bay’s economic vigor, Ambassador Romualdez shared the profound transformation that the Philippines is undergoing, with the country’s economy considered to be one of the most resilient and fastest growing in the world. According to the Ambassador, the Philippines is on-track to become a middle-income country by 2022 and might even grow into a trillion-dollar economy with a GDP per capita of US$8,200 by 2032. Currently, the country’s robust growth continues to gain momentum, fueled by the massive investments in investments and infrastructure, universal health care, and continuing fiscal reforms. He emphasized however, that “economic growth is not the ultimate goal, but to bring down poverty rates and create more opportunities for all law-abiding Filipinos.”

Regarding the Philippines’ relations with the United States, Ambassador Romualdez states that the relationship between the two countries has never been better, given that it is more “firmly anchored on mutual respect and the recognition that both independent and sovereign nations.” For the Ambassador, the return of the Balangiga Bells to the Filipino people in December 2018 stands as a powerful symbol on how the bilateral relationship between the two countries has “grown and matured into one between equal partners that share common values and aspirations.” Along this line, he took the opportunity to thank those who worked for the return of the historic bells, including US Navy Captain (ret.) Brian Buzzel, who was among the participants in the meeting.

For overseas Filipinos, the Ambassador assured that the Philippine Embassy and Consulates General in the United States, including the Consulate General in Chicago led by Consul General Gina A. Jamoralin, still place top priority in ensuring their welfare. He disclosed that no less than President Rodrigo R. Duterte has given the marching order to “deliver the most effective and effi cient public service possible and to remain attuned to the needs of Filipino and Filipino- American communities in their jurisdictions.”

Ambassador Romualdez thanked the members of the Filipino communities from the Midwest for their continuing support to the Embassy and Consulate General in Chicago’s programs and events. He enjoined them to participate in the Consulate General’s YOULead in Youth Immersion Program and the 2020 VIP Tour. Commending the Filipino voters in the Midwest (which registered the highest overseas voter turnout in the US in the May 2019 midterm elections), he challenged them to be united in supporting and voting for local and national candidates who advocate for their communities’ best interests.

Ambassador Romualdez candidly answered several questions from the guests during the Townhall Meeting’s Q&A. On the appointment of Vice President Leni G. Robredo as “Anti-Drug Czar, Ambassador hailed the appointment of VP Robredo, which shows not only her willingness to serve, but the country’s unity in times of trouble.

Regarding references to the Philippines’ “chummy” relationship with China, the Ambassador related that the Philippine’s “new approach to China” is that despite the issues related to the West Philippine Sea, the two countries can still be friends. This approach, according to him, must be taken in the context of past developments and present realities. Ambassador Romualdez also clarified that Chinese offers to finance various projects in the Philippines are strictly scrutinized by the country’s economic and finance managers and, contrary to popular belief, the biggest financier of government projects is not China but Japan.

Before closing his segment of the Town Hall Meeting, Ambassador Romualdez invited those present to attend the grand celebration of Philippine Independence on June 13, 2020 at Constitutional Hall in Washington D.C. 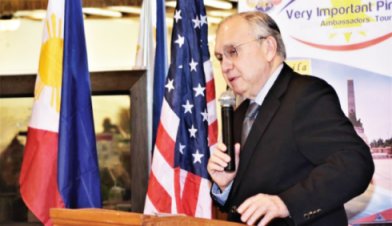 Ambassador Jose Manuel G. Romualdez meet members of the media, local offi cials, and Filipino communities from the Midwest in a Town Hall Meeting at Niles, Illinois, on 09 November 2019. Of the 4.3 million Filipino Americans living in the US, about 328,000 are in the Midwest (Photo by Cornelio Santiago)

2019-11-01
administrator
Previous: China Furniture & Arts
Next: Ashton Kutcher, James Corden and more Fight Cancer at Rebels with a Cause 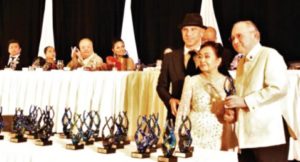