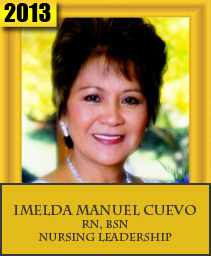 T h i s e n e r g e t i c n e w l y – e l e c t e d President of Philippine Nurses of Illinois Inc (PNAI) graduated from St. Anne’s Hospital School of Nursing in 1968. While working at the National Mental Hospital as a staff nurse, she enrolled at Far Eastern University for her Bachelor of Science in Nursing degree graduating in 1969. She left for the United States with her family in 1972 and worked at St. Anthony Hospital. In 1974, Then transferred to the Cook County Hospital Department of Medicine-MICU where she worked as a charge nurse until 1983. From there, Imelda pursued the highest potential in her professional career as evident in her increased knowledge and skills in nursing practice. From MICU, she transferred to the Fanctus Ambulatory Clinic and became the charge nurse in the Family Practice Unit, where she received recognition for giving quality patient care and maintaining good relationships with coworkers and heads of the department. She retired in November 2002 after working at Fanctus for seventeen years. Nurses and staff in Fanctus Clinic and Family Practice held high regard for her service as Imelda is compassionate in whatever she does and gives only her best. I m e l d a i s a c t i v e i n s e v e r a l organizations, including the Far Eastern University Nursing Alumni Association, in which she served as Board of Director for two terms 2003-2007 as well as Vice President for two terms 2008-2012. A member of the Mendachic Club since 1980 to Present, she served as President for two terms 2003-2007. She also served as Vice President of West S u b u r b a n P h i l i p p i n e C i v i c G r o u p . Professionally, she has been an active member and officer of the Philippine Nurses Association of Illinois for many years. She served as Board of Director for three consecutive terms and served as Chairman of the Membership Committee for four years and is the President 2013-2015. She is particularly visible during fundraising events, conventions, and seminars. She is an active member in the Eucharistic Ministry and Healing Ministry of St. Joseph Church, her parish in Addison. She participated in the Medical Missions which served different parishes from 2003 to 2004. She is also a member of the Fatima Charismatic Prayer Group. Her hard-working spirit and genuine interest to serve others include helping those that need assistance for their medical follow-up at Fantus Clinic and Cook County Hospital. She continues to assist those in need even beyond her retirement from the facility. A wife and a full-time mother to her three children, always makes sure that she is around when they needed her. She loves gardening, singing, dancing, and enjoys being with people. At present, she is the Administrator/co-owner of the Good Samaritan Home Health Services Inc. since 2007 visiting patients to promote and monitor the quality of life in the community. Imelda was nominated by Mrs. Remy dela Cruz.