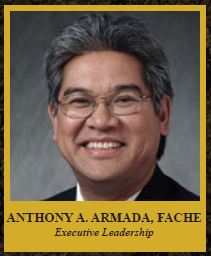 Anthony A. “Tony” Armada is the President for Advocate Lutheran General Hospital and Advocate Lutheran General Children’s Hospital.  Lutheran General is one of the flagship hospitals of Advocate Health Care, the largest health care provider in Illinois.  Lutheran General is a 638 bed teaching, research and tertiary care hospital and Level 1 trauma center.  Lutheran General Children’s Hospital is one of the most comprehensive providers of pediatric care in the state.  The Lutheran General service area has an annual operating budget of $900 million with 4,262 associates and 1,200 physicians.Before joining Advocate Lutheran General, Mr. Armada was President and Chief Executive Officer for Henry Ford Hospital and Health Network, Detroit, Michigan from 2004-2009.  Mr. Armada also served as Senior Vice President and Area Manager for Kaiser Permanente’s Metropolitan Los Angeles Service Area in Los Angeles, California from May 2000 – May 2004 and has held diverse senior leadership roles in his 31 years in the health care field.  At the age of 35, Mr. Armada was appointed to his first Chief Executive Officer position at Chino Valley Medical Center in Chino, California.  In 1981, Mr. Armada started his career in healthcare as a midnight shift Medical Technologist in the clinical laboratory of St. Lawrence Hospital in Lansing, MichiganIn 2012, Mr. Armada was appointed President of the Healthcare Executive Study Society, a voluntary educational organization for nation’s leading healthcare professionals.  In 2011 he became a member of the American Hospital Association’s Equity of Care Committee to promote cultural responsive care with the aim to eliminate healthcare disparities in this country.  He was also appointed to the Board of Trustees of the Kohl Children’s Museum of Greater Chicago in 2010.   As Mr. Armada values diversity in health care leadership, he has also served as Chairman of the Institute for Diversity in Healthcare Management Board of Directors and in November 2007 was appointed the inaugural chairman of the newly formed Asian Healthcare Leaders Association, a national 501c-3 organization, he had the honor in establishing with several Charter Members, which promotes life-long learning, coaching and mentoring, career development and networking opportunities in collaboration with the Institute for Diversity, American Hospital Association and the American College of Healthcare Executives.In 2008 and 2010, Mr. Armada was selected as one of the Top 25 Minority Executives in the United States by Modern Healthcare magazine.  Mr. Armada was the recipient of the ACHE 2011 Dean Conley Award for his article “Diversity in Healthcare: Time to Get REAL!” published in the Spring 2010 issue of Frontiers of Health Services Management.Mr. Armada also served on the Xavier University President Council and Graduate Program in Health Services Administration Advisory Board and Michigan State University Dean’s Board of Advisors in the College of Natural Science.  He also serves as a mentor for the American College of Healthcare Executives and other resident/fellowship programs.Mr. Armada received his bachelor’s degree in Human Medicine – Medical Technology from Michigan State University and his dual master’s degree in Health Care Administration and in Business Administration from Xavier University, Cincinnati, Ohio.  He is a Fellow of the American College of Healthcare Executives and a member of the Healthcare Executive Study Society.  Mr. Armada resides in Glenview, Illinois with his wife, Araceli and two daughters, Alexandra and Alyssa