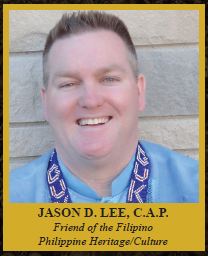 Jason Lee is the pride of the Filipino-American communities of Central Illinois. His great compassion for Filipinos and his desire to promote Filipino culture has gained him respect from many Filipino-American associations from around Illinois. He is currently the Founder and organizer of the Filipino American Association of Decatur, the 2012 President of the Central Illinois Philippine American Society (C.I.P.A.S) and, the 2012-2013 President of the Filipino American Historical Society (FilAmHisSo); both groups are based out of Springfield, Illinois. Jason grew up in Central Illinois but his family moved to Chicago in 1985. He attended Senn High School and graduated in 1988. During that time, Senn was a very diverse high school and by his senior year he had many Asian friends and was voted in as Vice-President of the Filipino Club 1987-1988. That was the beginning of over 20+ years of participation and service to different Fil-Am communities and organizations.     He has visited the Philippines a number of times and has helped and supported Filipino families, schools and churches and their mission works in the Bukidnon, Mindanao region of the Philippines. In 2007, he was married in the Philippines to his wife, Jocelyn Fuentes Lee, who was a school teacher in Bukidnon for over 8 years and specialized in Special Education. Jason’s kind hearted help in Bukidnon has had the support of Bukidnon Governor Jose Ma. R. Zubiri, the Mayor & Vice Mayor of Malaybalay City and many of the local Barangay Captains. He has went on mission trips with his local church deep in the mountains of Bukidnon to the tribal villages of Kibongkog and Kalinawan where he learned some of the culture and dances of the Tigwahanon Manobo tribe. On his many visits he would stay for up to 6 months at a time.     Before returning home in 2008 he helped sponsor and participated in a city wide Anti-Drug and Tribal Concert which was putting on 3 concerts a week through out the city and surrounding Barangays of Malaybalay City. The concert was such a success with it’s anti-drug message and tribal dance performances, he was granted permission to perform during the Opening day festivities of the Kaamulan Festival, which was one of the largest festivals in Mindanao and showcases the original 7 tribes of Bukidnon. Jason, over the years, has brought more back from the Philippines than just memories. Over his travels, he took hundreds of pictures and collected different items and artifacts that represent the culture and life of the Philippines. Currently, Jason and his wife have what many consider to be the largest traveling culture exhibit on the Philippines. It is titled the “Life and Times of the Philippines and the Filipino.” It is a 12-table exhibit which also includes a tribal section, a replica built Sari-Sari store and a Carenderia. They have been invited to showcase their exhibit at different Fil-Am events and ethnic festivals from the recently showing of the Neighborhoods of the Worlds at Chicago’s Navy Pier to ethnic festivals in Peoria, IL and St. Louis MO. Last year they were invited by the officers of Tampa, Florida’s largest Filipino festival, Philfest 2011. It was a huge success and the exhibit was the center of attraction for the 3-day festival. For Fil-Am families and organizations in Central Illinois; he provides a Lechon Baboy service with a Hog Roaster he designed and had built and mounted on a trailer; and in his “spare time”, he provides a quality but professional DJ Service where he has earned the nickname DJ Amerikanoy. Jason & Joy have a two- year- old daughter, Aiyanna Lee, and are expecting their second child, a boy, in August.