Young policewoman, mother of 2-month-old, killed in Chicago as city sees 64 shot, 10 murdered over the weekend

While Chicago is suffering dozens and dozens of people who get shot and killed every single weekend as well as during weekdays, this past weekend was especially shocking since it saw the absolutely brazen shooting of two police officers.

One of them is still struggling for his life in hospital, while the other one, a 29-year-old policewoman, Ella French, who had just come back from her maternity leave, has died leaving motherless a 2-month-year baby.

French and her male colleague were executing a traffic stop on Chicago’s South Side, when they were shot at from a vehicle with two men and a woman, which had been pulled over around 9 pm on Saturday.

One of the three persons in the car was wounded as the police officers returned fire, announced Chicago PD’s first deputy superintendent, Eric Carter, on Sunday at a news conference.

All three suspects are already in custody even though one of them was at large for a while; the police haven’t released their names

The murder of Ella French is the first fatal shooting of a police officer in Chicago since 2018, and since 2019 when wokeist Lightfoot became mayor; and also the first killing of a policewoman in the city in 33 years.

Murdered policewoman Elle French’s brother, Andrew French, described her in a Facebook post as one who has “always been a person of integrity” and has “always done the right thing.”

Speaking at a news conference on Sunday, Democrat Mayor Lori Lightfoot, who has previously denied the enormity of the problem with really violent crime in Chicago, came up with a message of seeking unity between police critics and police proponents – as though criticism has anything to do with the stringent need for efficient and decisive law enforcement.

Lightfoot did have the decency to state what is obvious to any sane, decent, patriotic American – that the police aren’t “our enemies” – because, obviously, misguided wokeist leftists need to be told that.

She did push the Democrat agenda, however, by describing the “common enemy” not as the criminal gangs but as “the guns and the gangs” – a veiled hint at a desire to take away Americans’ Second Amendment rights.

As the dozens of corpses every week seem to have become something routine for Chicago’s mayor and her administration, even the heartbreaking story of the young policewoman and mother who leaves a 2-month-year old baby an orphan hasn’t swayed Lightfoot, and instead she immediately went to “the guns” as the culprit – as though they are some kind of robotic guns that shoot people by themselves. (American Truth) 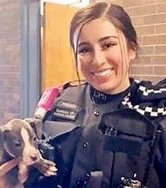