The Boobay and Tekla Show spreads laughter with fresh episodes

Following their several months of hiatus due to the COVID-19 pandemic, Boobay and Tekla express their excitement on returning to work and tease their loyal viewers on what’s in store for their much-awaited comeback.

The comedic duo also shares how their entire team carefully complied and observed all the safety protocols before and during the taping.

Not even a global health crisis could stop the two from spreading fun, laughter and positivity together with their virtual audience – live via streaming!

This Sunday, international stage actor Mark Bautista will take the hot seat as he tackles some of the naughtiest questions in the controversial interview segment called, “Feeling the Blank.”

Mark will also showcase his improvisational comedic skills in “Boobay and Tekla Presents…. Si Malakas at si Maganda.” In this hilarious modern retelling of a popular legend, Mark will play Malakas while Boobay takes on the role of Maganda. Tekla will narrate the story.

In “Pasikatin Natin ‘To!” our hosts will be counting down the week’s funniest videos sent by our viewers.

The outrageous letter- reading segment, “Dear Boobay and Tekla” is also back with even funnier and stranger problems from everyday people.

Finally, Jose Mari Chan together with Boobay and Tekla will usher in the start of “ber” months with a live rendition of “Christmas in Our Hearts.”

Get your weekly dose of positive vibes and catch the fresh episode of ‘The Boobay and Tekla Show” – under the helm of esteemed director Rico Gutierrez – beginning Sunday (September 13), 10:15PM, right after Kapuso Mo, Jessica Soho only on GMA Network. 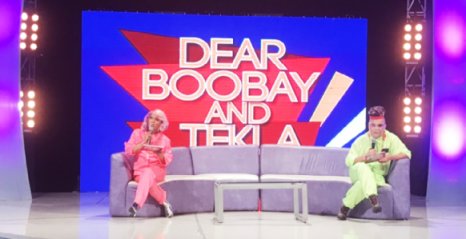