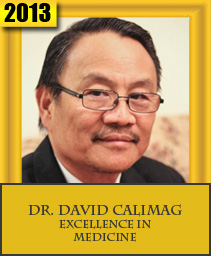 Dr. David P. Calimag started from very humble beginnings. David was born in Aparri, Cagayan on December 20, 1947, the fifth of six children, to two loving parents, Placido Calimag Sr, an elementary school p r i n c i p a l a n d J u a n a P a m i t t a n , a n elementary school teacher. While his parents did not have much, they always wanted the best for their son and continually strove to instill in their children good morals and values. David has always been a natural leader with a strong work ethic. As early as he can remember, he had to work to put himself through school so he had to be efficient with his studies and juggle his time well to make his way, as he always aspired to live a good and successful life. He g r a d u a t e d f r o m P a r u d d u n N o r t e Elementary School with First Honors in 1960 and from Cagayan Valley Institute as the Class President in 1964. Dr. Calimag then earned his Bachelor of Science in Pre- Medicine at the University of Santo Thomas (UST) in 1968, and became a Doctor of Medicine at UST in 1972. He went on to do an internship at the UST Hospital from 1972-1973 and completed his residencies in both Neurology and Psychiatry from1973-1976. Dr. Calimag wanted to make the most of his life for himself and his family and in 1976 he moved to the United States in search of the American dream. He became a resident of Neurology at the University of Louisville, Kentucky from 1976-1979 upon receiving a strong recommendation from one of his medical professors. He went on to become Senior Resident of Neurology f r o m 1 9 7 9 – 1 9 8 0 a n d a F e l l o w o f Neuromuscular Diseases from 1980-1981 at the University of Cincinnati in Ohio. While he was always grateful to continue learning in this new country, he wanted to find a place in this to put down his roots.

Dr. Calimag and his family claimed Chicago as their city and Morton Grove, Illinois as their home in 1982. Dr. Calimag had been an Attending Neurologist for the Cook County Hospital Bureau for 26 years from 1982-2008. From 2008 onward, David has chosen to continue his medical vocation and maintain his own solo private practice, Neurology & Neurodiagnostics in Park Ridge, IL and continually consults in surrounding Chicago area hospitals. David has been married to Rosario Halili-Calimag MD, UST Class of 1974, for over 38 years and counting. They have 3 grown children, Dr. David M. Calimag with a family practice in New Lenox, IL, Charmaine Calimag-Wilke a Bachelor of Science in Psychology and Marketing, and Vanessa Calimag a BS in Information Technology and Master of Business Entrepreneurship. In addition to their three children, David and Rosario are blessed with 8 beautiful grandchildren ranging in age from 1 to 17! The doctor and his wife Rosario, enjoy a full social life with wonderful friends and their growing family which keeps them busy. David and Rosario devote much of their time to their local church, St. Martha Parish, where they have formed many lasting friendships over the years. They both love to travel the world, and see new lands and feel fortunate to do so often. They also travel back home to the Philippines frequently to see family and to give back to their homeland and medical university when they can. While Dr. Calimag’s vocation in life has been to serve as a Medical Professional, his natural instinct is to lead and help others, specifically those less fortunate. Dr. Calimag has previously held the position of President of the Fil-Am association of Morton Grove in addition to the President of the Cagayan Valley Circle of Chicago under whose auspices the Medical Missions to Cagayan, ie, Tuguergarao, Lallo, Solano and Aparri were done. One of Dr. Calimag’s philosophies in life is to give back to his homeland, helping him to stay close to his people and helps him to never forget where he came from. By serving in these medical missions, he is able to provide care to those who otherwise would not receive treatment, thus helping him to accomplish this goal. He is also currently supporting 5 students through the Christian Foundation of Children and Aging (CFCA), from grade school to college. Over the years, the doctor had supported 2 young people, one in accounting, a young man from Nigeria and another, graduated in business, a young lady from the Philippines. As soon as these kids graduated and began working, his support was transferred to other little dreamers who are being given the opportunity to grow up and better their life through education. Of the 5 he is sponsoring, 1 is from Chile and 4 are from the Philippines. David is the current Chairman of the Human Concerns Commission of St. Martha Parish in Morton Grove, where their current project helps widows in a small village in India, become empowered and self-sufficient through micro loans. Additionally, he had given back to the University where he received his medical degree, the University of the Thomasian Medical Center, a multimedia project for the use of Thomasian graduates. And, some other projects are on-going such as establishment of a Neuropathology Laboratory at the Faculty of Medicine and Surgery. Presently, David serves as trustee to the Morton Grove Public Library, having been re-elected to another six year term in the recent election in April 2013. He also serves as one of the commissioners of the Environmental Health Board of Morton Grove. Dr. Calimag was nominated by Mr. Rudy Fernandez