AFL-CIO President Richard Trumka makes one last trip to the House of Labor, a place and an idea that he loved so much. From his days as a staff attorney for the United Mine Workers of America until the last day of his life, Trumka devoted his career and life’s passion to working people as a relentless champion of labor rights, workplace safety, worker-centered trade, democracy, and so much more. He was also a devoted father, grandfather, husband, brother, coach, colleague, and friend.

LCLAA shirt was worn at 10:00 AM at Lafayette Square in front of the White House before proceeding together as a delegation.

LCLAA also shared on Facebook the live stream of the service being held on Thursday, August 12 at 11:00 a.m. ET.

And lastly, for those who were unable to join LCLAA’s 23rd National Convention, you can view President Trumka’s last message to LCLAA and our members, this video was delivered in the evening of August 4th to the LCLAA delegation in Las Vegas. 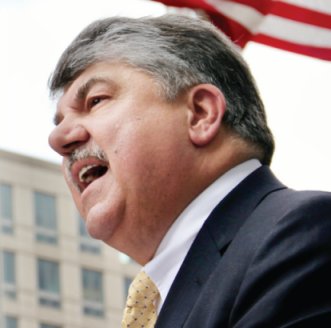